From Fanlore
< Marcus Bell(Redirected from Joan/Marcus)
Jump to: navigation, search

Marcus Bell/Joan Watson, more commonly referred to as Joanbell, is a rare pairing in the Elementary fandom.

Marcus Bell and Joan Watson are both main characters on Elementary, and they often interact on-screen as part of their detective work. Over the course of the show they have gone from being professional colleagues to being friends who joke and take care of each other. At one point Joan cooked food for Marcus while he was recovering from an injury; at another point Marcus complimented the way Joan wore a bulletproof vest. Joan often wears her hair in a ponytail when she meets with Marcus; this is relevant to shippers because in an early episode Sherlock told Joan that she wears her hair up when she wants to be attractive to potential romantic interests. 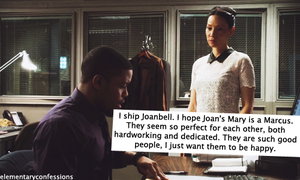 2014 Elementary Confessions submission: "I ship Joanbell. I hope Joan's Mary is a Marcus. They seem so perfect for each other, both hardworking and dedicated. They are such good people, I just want them to be happy."

There have been people shipping this pairing from the show's beginning, but it received a boost in popularity during season two, particularly after Joan & Sherlock's relationship got rockier and Marcus got injured.

On 14 May 2014, fyjoanbell announced they would be hosting the first Joanbell Fest, titled The Detective and the Consultant. Prompting took place from 16-23 May; prompts were be revealed 1 June and fans began work on answering the prompts during that month; 1-7 July were be seven days of Joanbell, when the posting took place. Any type of fanwork (fic, art, graphics, meta, etc.) was welcome.[1] Over the course of the week, eight people posted 23 fanworks, predominantly fanfic; the masterpost of fanworks can be found here.