Invictus is a gen Equalizer anthology.

As to most fans not buying zines for artwork... I'll be the first to admit I'm not like most fans. Three times within the past year I've purchased a zine because of the art, having little or no interest in the actual text (and this from a devoted writer!). One of the zines I purchased happened to be Invictus 2, and my reaction to that was to immediately purchase Invictus 3 & 4 upon arrival in the dealer's room this year, [1] and to hunt unashamedly for Invictus 1 (GOT IT!)

through every used zine box I could find. I didn't know these people before I read these zines and I still don't know them, but they've got some damned fine writers and artists working for them. And they snagged me because I wanted to dissect those two pretty pictures and find out how they were done. It's the old fly to honey technique. And it worked. [2] 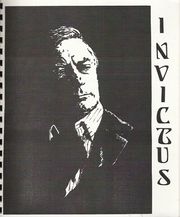 Invictus 1 was published in November 1991 and contains 285 pages. The art is by Dani Lane, Jayne Largent, Beatrix Lawlor and J.M. McClure (front cover). 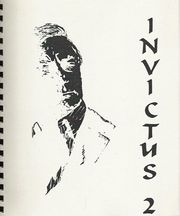 Invictus 2 was published in May 1992 and contains 301 pages. The art is by J.M. McClure (front cover), Beatrix Lawlor (frontispiece), Anja Gruber, Jayne Largent and Anja Gruber.

I like the written word. The ebb and flow of text continues to amaze and delight me. Which is why I often find it difficult to read, never mind review, fanzines. Sure, you miss a typo now and again, but when participles are dangling in the margins as if fishing for the completion of a thought, or strings of adverbs form lapis lazuli sentences that go on for pages, or character description is limited to "the brown-eyed man," I swear off the stuff for my health and sanity. If you're lucky, fifty percent of the submissions are readable, and you get maybe one really solid whopper of a story for your hard-earned nickels. I've grown to expect little, and usually get less.

So imagine my coos of delight when I found the fiction in Invictus 2 to be not only readable, but enjoyable. Sentences, descriptions, plots, characterization—I was all in a swoon! And this from a zine that I'd purchased purely as a learning exercise. Yes, that's right..I bought this whopper of a zine because it had a couple of pretty pictures in it and l wanted to learn how they were done. And then I find that the fiction, my first true love, is even better than the artwork. Life don't get much better than this, buckeroos.

It's strange - in an Equalizer zine I expected to read a lot more about Robert McCall, but the fiction in Invictus 2 seems centered on McCall's son, Scott, or Mickey Kostmeyer. Not that I'm complaining, mind you, but I would like to have seen a few more along the lines of "Simple Pleasures," by M.C. Christjansen. Then again, counting the number of times Scott gets kidnapped, or pissed off because his father wants him to stay behind, can get tiresome. I'm also beginning to think that Kostmeyer might just beat Kuryakin this year for the "Character Most Likely to Get the Stuffing Beat Out of Him" Award. The best story of the bunch, "Morpheus," by Linda Knights, has a shaky paragraph here and there, but it's a well-plotted thriller, true to the show's tone and tension quota. Considering that you usually put your best stories at the end of the zine, I was more than a little surprised to find that it was the first one in the zine—kind of a letdown when I plowed my way through this three hundred page omnibus and found that nothing else quite lived up to that first high. "Remembrance," by Beth Didion, a brief piece about the death of Control's wife, comes close, as does "Sleight of Hand," by McClure and Smith, but the latter suffers from an excess of character reaction and a lack of solid, descriptive action sequences. If the writers in this zine lack anything, it's that rare ability to juggle word length and attention span. More than a few intense action scenes are described, rather than played out before the reader's eager eyes (and when Mickey and any one of his girlfriends start shouting at one another, I was ready to kill for an old-fashioned gun battle or a midnight cat burglary). It's a small criticism, truly, because the writing is so damn'good as it stands, but a little more attention to and concentration on maintaining point of view, and some experimentation with scene changes and descriptive time fillers could make these stories catch fire and burn!

I will take offense at the resolution of at least one story-- "Paybacks," by McClure and Smith. It's a very brutal plot and the characters are handled well (especially Scott's mother), but I didn't buy the ending. If you set up a very realistic modern horror story, don't pull the punches at the end. Without giving anything away, let's just say that I don't believe Control's solution would have been acceptable to McCall, even though it seems to be the best solution to the problem. You don't have to tie up every knot at the end of a story...sometimes it's better just to give the reader the sense that problems do lie ahead and that they'll be worked out, even though it's going to cost.

So what about this artwork that had originally parted me from my grimy $22.00? Just some damned keen pencils lovingly screened and the occasional bitchin' pen and ink. I'm still not certain about the cover—it's an effective negative portrait, but the layout just doesn't do justice to the picture or the letters. Maybe if both had been shot down by an inch or two and a bar or corner added to ground it somewhat...that might have done the trick.

I'm not against using portraits as illustrations, but at least make certain the pictures are appropriate to the surrounding text...or place the artwork in a portfolio section. There were some really beautiful pieces that fit neither the action nor the mood of the text by which they were surrounded (like the Control and Mickey on page 16, or the cat face on page 41). There are also a few pen and inks that swim around on the page and could have benefitted from appropriate layout. The Gage on page 90 probably should have been reduced and either grounded with more background and edge, or placed as a half-page or quarter-page illo, surrounded by text, as was done with the illo of Control on page 45. My favorite pen and ink would have to be page 209--a lovely portrait with light, heart, fire, shoulders, and more than a hint of the personality of the character. My favorite pencils, both by Beatrix Lawler, are a very expressive McCall and Control on page 3, and a perfectly brilliant Scott on page 269. God, what lovely repro!

Invictus 2 is a treasure—a zine that not only made me stay up way past my bedtime to catch a few episodes of the show, but also instigated a desire to write Equalizer fiction and, dammit. [3] 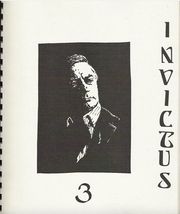 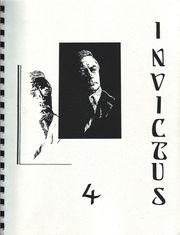 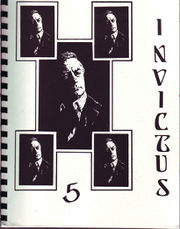 Invictus 5 was published in 1994 and contains 327 pages. The art is by Anja Gruber, J.M. McClure (front cover), and Jayne Largent.