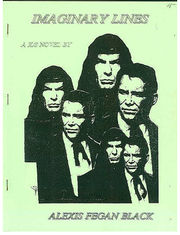 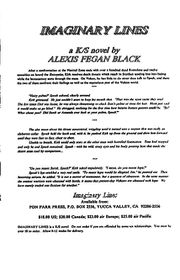 This story was reprinted in 5 of Hearts: The Collected Short Novels of Alexis Fegan Black.

Summary from Media Monitor: "When Kirk and Spock are essentially stranded on Vulcan for an extended stay, they have little to do but talk - which leads to learning more about one another and the eventual exploration of their feelings. Lots of philosophy in the 'old style' of K/S.."

Summary from unknown source: "Threatened by the Romulans after a fierce battle, Kirk and Spock retreat to the mountains of Vulcan and discover what it truly means to become warriors -- and lovers."

Publisher's summary: "After a Neutral Zone confrontation ends with a hundred dead Romulans and twelve casualties on the Enterprise, Kirk receives death threats which result in Starfleet sending him into hiding while the bureaucracy sorts through the mess. On Vulcan, he has little to do other than talk to Spock, and there the two of them confront their feelings as well as the mysterious past of the Vulcan world."

Summary from Gilda F: "Spock takes Kirk to Vulcan to protect him after an incident with the Romulans leaves Kirk a marked man."

"Do you resent Surak, Spock?" Kirk asked impulsively. "I mean, do you resent logic?" Spock's lips crinkled a very real smile. "To resent logic would be illogical, Jim," he pointed out. Then, becoming serious, he added, "It is not a matter of resentment, but a question of obsession. In the same manner the ancient warriors were obsessed with battle, it seems that present-day Vulcans are obsessed with logic. We have merely traded one fixation for another.

Ms. Black's newest novel, this tells the story of Kirk, as Captain of the Enterprise, having trouble with the Romulans, so the Federation and Starfleet send him to hide on Vulcan. He stays with Spock at his house near the mountains. Together they travel to the place where the ancient Vulcan warriors lived and they discover their love. Slight of plot, but filled with some wonderfully inventive Vulcan history. This author has a way of writing such definitive, believable history, that you almost think it to be gospel. One would love to see some of the "facts" portrayed here carried through to other stories. These "facts" are so rich and colorful: everything from types of animals living in the Vulcan desert, to rituals and culture of the ancient warriors. Absolutely beautifully realized. The story actually concerns itself with Spock's background. This includes a lost love of his childhood and past liaisons which now culainate in his discovery of his love for Kirk, The "imaginary lines" of the title refers to those things that he and Kirk dare not cross and explore. Not totally clear for se, but still an interesting area. The main feature of the novel, however, is not the plot or storyline. It's the writing. Ms. Black is one of the best writers of erotic encounters I have ever read. These are slow, detailed and enthralling love making scenes, filled with cosmic import, but never any silly descriptions or jarring phrases. In the simplest moments, she slips in some beautiful language. Example: "'Mr. Spock, I'm not exactly dressed,' he said, wondering for a moment how much of his dream had turned into a telepathic maelstrom for the Vulcan's perusal." or "'Are you all right, Jim?' Spock inquired, standing next to the bed dressed in his thick black robe and his unwavering Vulcan aura." Those are the quiet moments with such detail. Here's one lovely excerpt: "But he forced himself to go slow. If they bonded, it would be a mutual agreement arrived at through sane, logical means. And if they didn't, at least there would be this night - this mystical night of madness and indiscretion, this magical night when some naughty god had possessed his captain's body and invited a lonely Vulcan to play in the fields of paradise." Enough said. [1]