I Can't Stand to Fly 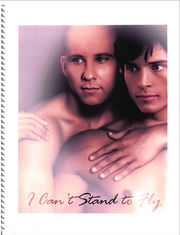 cover by The Theban Band

Over a year ago, I swore I would not under any circumstances become involved in Smallville fandom. I was a huge fan of the TV show, Lois & Clark and there was no way on this earth that Superman could be involved sexually with Lex Luthor! I had heard all the rumors of the "eye-fucks" and slashy undertones, but I was ignoring it.

Then one day, someone gave me a Emmy tape of the "Pilof and "Hourglass" from first season. I thought, I'l watch it see what all the hoopla is about and then give the tape to my friend Kel, who had ditched Highlander fandom for Smallville land. Well, a year later, I still have the Emmy tape and I am now totally enamored with Clark and Lex. It is now, Lois who? And Lex and Clark are so doing each other!

This zine was a complete surprise to me, as after my last Highlander zine (a 400 page novel), I said no more zines, because the last one had taken over a year to produce. But, with so little Clark/Lex zines out there, I thought, why not do a new zine? Call me fickle. At least now, I have figured out the basics of how to publish a zine ~ or I think I have!

Being a One True Pairing girl, the only stories you will find in this zine are Clark/Lex ones. In my Smallville universe, there are no other slash pairings! If I ran the WB Network, it would be Clark and Lex having sex 24-7 as Lex makes his bid for the Presidency. Lana would be on a deserted island somewhere, Chloe would be running the National Inquisitor and Pete would be a superstar actor with lots of babes falling all over him. (The poor guy deserves it.)

But getting back to this zine and away from my delusions, inside you will find some of the finest writers and artists in Smallville fandom, some of them I have worked with before in Highlander and some are new faces. Each has brought an unique perspective to the Clark/Lex relationship with their stories and art. So, I'd like to thank them for all their hard work and cooperation. I must say that this zine has been so much fun to work on and I credit all of them for that!

So, thank you to: Sue, Quin, A.F., Dayspring, Ori & Rina, Peach, Kel, Shelley, Osianna, Deejay, Jam-Wired, Suzan Lovett (fold-out, not listed in the table of contents) and Theban Band. And most importantly to my co-editors: Jenny S. and Jennie M., as they went above and beyond the call of service and have my deepest thanks and admiration for helping me with this endeavor!

At the end of the zine, you will find their contact information, please drop them a note if you enjoyed their stories or art. Feedback is a good thing and enough feedback may tempt me into publishing another zine.

So to conclude, I hope you enjoy your journey through I Can't Stand to Fly, I know I did. And remember, rift, what rift? Clark and Lex are soul mates.

I Can't Stand to Fly is a Clark/Lex zine from the Smallville fandom. I bought this one because, well.... Have you ever seen a preview for a movie and thought, "Damn, I gotta see that!" only to find out when you go see it that they used all the good parts in the previews? I didn't realize that could be done with a zine, but this one showed me it was possible. The publishers of this one, OMD press (who appear to have dropped off the web) had previously published the Highlander zines I enjoyed so they had credibility with me. They also provided extended excerpts from some of the stories in this zine.

Unfortunately, upon reading this, I found that those excerpts were the only good things in this one. The graphics, the technical aspects, all of that was absolutely beautiful in this zine, I have to give them that much credit, but it didn't help with the quality of the writing. With each story I read I kept thinking, "Surely the next one has to be better!" But it never was. Every story in this zine is average to borderline bad. Fortunately there are only one or two that fall into that latter category, but there still isn't an excellent story out of the lot. The characterization is just...off, in every story. In half the stories Lex cries, wails, sobs and overall just acts like an adolescent girl and Clark shows far too many signs of being the Big Dumb Alien. It isn't a total OOC fest or else this one would be tossed in the "Worst in Fandom" category, but not one author managed to grasp the characterizations properly either. There were also cases of purpleness in a couple of the stories and, very unfortunately, one story where the author loved the epithets. This zine was just a huge let down, not to mention a waste of my money. [2]