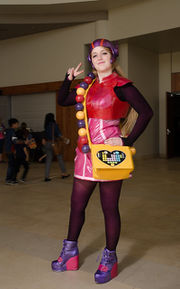 Honey Lemon is a college student at the San Fransokyo Institute of Technology (SFIT); she worked with Tadashi Hamada before his death and later became part of Hiro's superhero team. In her civilian ID, she wears a bright yellow outfit; her superhero suit is pink and orange. She carries a purse that later became her "Chem-Purse" filled with chemistry-based superhero gadgets.

She's upbeat and cheerful, a bright contrast to several of the more worried or suspicious members of the team.

Honey Lemon is most commonly shipped with GoGo. This comes despite the stark differences between the two, and the several het possibilities available to her, such as Tadashi. This could simply be the fandom wanting more sexual diversity, or people not seeing her as a heterosexual. Either way, while het ships certainly happen with Honey Lemon, they aren’t as common.