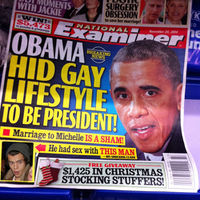 Once upon a time in 2014, someone tweeted a picture of a tabloid headline claiming that Barack Obama had had an affair with Harry Styles.[1]

The picture turned out to be a Photoshopped image of an actual tabloid headline claiming that Barack Obama had had an affair with a different man, but the meme somehow lived on as possibly the strangest crack ship the 1D and American Political RPF fandoms had seen in a while.

The pairing was given the name Hobama, and has resulted in a swath of jokes, photo edits, fics, memes, and sometimes proof posts. The "rumor" has also been brought to Harry Styles' attention in interviews. It's unknown whether Obama is aware of the rumors.

Fans sometimes use the phrase "Hobama is real" when talking about the ship, in what is surely a tongue-in-cheek reference to the "Larry is real" rallying cry of Larry Stylinson tinhats. Larries have sometimes used Hobama as support for their ship, though there seems to be some disagreement among Larries as to what Harry's stance is re: Hobama. See Answered ask by verily-i-say on Tumblr on 23 April 2017, which states that "the hobama denials are to show how harry denies obviously untrue rumours" and Answered ask by britishhusbands on Tumblr on 24 April 2017, which states that "the reason Harry doesn't end hobama rumours is because this is the only rumour that larry find funny".

Some Examples of Hobama Fanworks