His to Hold is a 249-page slash AU Smallville novel by Mirtai with a cover by KAM. It is set in an alternate historical period where everyone is bi-sexual but the laws of primogeniture and succession remain unchanged. 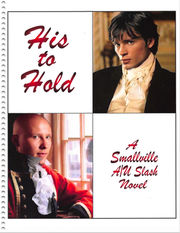 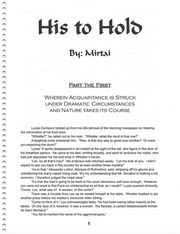 London, England, 1821. When jaded aristocrat Lex Luthor encounters fresh-faced country gentleman Clark Kent under dramatic circumstances, neither young man can begin to imagine what the future holds for them. The path of true love, however, never does run smooth – where would be the fun in that? Meet your Smallville favourites (and others) in disguise, in this Regency-style masquerade; a tale of Clark and Lex in different times; a light fantasy where everything, you may be sure, works out all right in the end.

His to Hold is a publication of Agent With Style and does not intend to infringe upon the copyrights or holdings of anyone connected to Smailville. No bribes of dark chocolate M&Ms, a front row seat to Revenge of the Sith, which is debuting this month, or a bigger hard drive on my Tivo were offered. Dammit. Laugh! Cry! Send LoCs!

Let me put your minds at rest; this is an unashamed piece of fluff. One day, I felt like writing a Regency Romance, and this is the result. I have no doubts that Georgette Heyer, any number of her imitators (successful or otherwise) and even Barbara Cartland, are all rolling in their graves at this instant. I apologise to their shades. However, I began this as a stylistic exercise, and I had fun with it. I hope you do, too.

There is a certain amount of historical fact in here, but also a great deal of nonsense. I leave it to you to sort out which is which, and trust you enjoy the ride in the process.

Primarily, of course, this has to be taken as an Alternative Reality, because in this world, everybody is bi-sexual, and everybody else knows it. However, the laws of primogeniture and succession are pretty much left as they really were, so matters of marriage and succession are still important in this make-believe society of mine, for reasons which I trust are obvious.

My profuse thanks, once again, go to pepperjackcandy, sunskjkid and moriavis for their assistance during the writing process and in editing. All mistakes and other infelicities are the result either of my post-beta tampering, or my ignoring their advice, both of which, on occasion, I am pretty sure I have done.