1. This fest is limited to 20 writers. Unlimited artist spots are available.

2. All participants must be at least 18 years of age.

4. You cannot choose the person for whom you will create fanwork. You will be assigned a challenge via email by a community moderator. (dreamdustmama or ella_bane)

5. All fic must be at least 1,000 words. Fanarts must be a complete piece and more than a sketch or preview (lines inked or seams blended).

6. All works must be cleaned up or beta-read.

7. In order to preserve anonymity, all fanworks must be able to stand on their own and not be part of another series or a sequel/prequel to other works by the same fan.

8. Please do not submit your work until you are completely satisfied with it. Once a fanwork is submitted, no revisions will be permitted. If typos or obvious inattention mistakes are spotted we will ask that particular creator personally if we may change it if we are able to, to avoid multiple copies of the same work and possible posting of the wrong version.

10. All fanworks posted here will be exclusive to the community until the names of the creators have been revealed. Please do not post them elsewhere on the Internet until that time.

Sign ups were Feb. 2, assignments went out Feb. 4, and posting started March 14, 2011. Requirements were: "Your work must feature the boys in a high school/secondary school setting. You can use any country's school system, just as long as the boys are in some sort of educational institution."[1]

Summary: During the summer before his senior year, Merlin notices that his friend Morgana's little brother Arthur isn't so little anymore.

Summary: Gwaine and Merlin change schools to Camelot College after Ealdor College is shut down, and they take their dare challenge with them.

Summary: Arthur's new at school, and he's a jock, so he probably shouldn't be seen hanging around with nerds like Merlin. Right?

Summary: Arthur and Merlin have morning detention for making out in the hallway.

Summary: Merlin is the new scholarship boy at Wakefield. He literally runs into Arthur Pendragon one day.

Summary: Arthur and Merlin are best friends, and neither of them is a member of the Magic Club. All is as it should be, until it isn't.

Summary: Merlin knows the easiest way to get through high school is to keep his head down, his mouth shut and his secrets to himself. If that means he's just acting most of the time, so be it.

Summary: Arthur and Merlin have been friends for a long time but Merlin is not happy with how their friendship works, so he kind of gives Arthur an ultimatum. Or the one where Arthur has to choose what he wants.

Summary: [Harry Potter AU] Being sixteen is not as easy and some people might think, especially not when you're a sixteen year old wizard. It would be easier if Merlin wasn't nursing a horrible crush on his classmate, had friends who spent more time consoling him instead of cajoling him and he didn't feel like a horrible failure every time he picked up a wand.

Summary: There's a new guy. A lanky, dark-haired boy with some killer cheekbones. Good-looking in a gangly way. Gwaine drinks the hot coffee and follows the kid's stretches and the way he seems to be happily yammering on with one of the other boys. Arthur keeps a tight ship, even with the JV brats. And talking during stretches is a good way to earn yourself an extra mile. But when Gwaine checks, Arthur is just watching the new boy with a slight frown.

Summary: Morgana's got her sights set on the new kid; not Merlin though – as far as he is concerned, Arthur Pendragon and his perfect face and perfect ass can take a hike.

Summary: Merlin's lyrics probably aren't as good as Shakespeare's verses, but then Arthur's no Romeo.

Summary: In which making out in the library has unfortunate circumstances, until it doesn’t anymore.

Summary: Arthur is voted King of the year-end May Ball. Merlin is voted his Queen.

Summary: "Let you put your hands on me in my skin-tight jeans, be your teenage dream tonight."- Katy Perry

The Yearbook Pages Arthur Will Never (NEVER) Publish... by amythystluna [Arthur/Merlin, PG-13]. Comic with SlightlyCluelessJock!Arthur and SlightlyGeeky!Merlin through their teenage years.

Azure by goss [Arthur/Merlin, R]. Experimented with watercolours. The cool colour scheme and general mood of the piece were inspired by the recipient's list of kinks and a bit of Harry Potter nostalgia.

In the Closet by tindu [Arthur/Merlin, R]. Merlin and Arthur making out in the closet.

My Number 1 by yue_ix [Gwaine/Merlin, PG-13]. Description: "Merlin's dream is to run the Boys 300m Dash, but thinks he can't because he's so clumsy. Best friends Gwen and Gwaine convince him to join the team, where Gwaine sets out to cheerlead for him every practice with increasingly embarrassing slogans, much to Merlin's hilarity and secret longing. At the final race, he tops it all by dressing as a cheerleader but sports a surprisingly direct message. It's only when Merlin's on the podium where he sees Gwaine's proud face over everyone's that he understands none of it had ever been a joke. They make up for lost time in the locker's shower room.

Beneath These Bandages by ravyn_ashling [Arthur/Merlin, PG-13]. This is the story of how Merlin, upon reaching the age of sixteen, had been branded as a magical being of the most dangerous kind; and how his best friend Arthur, despite finding out about Merlin's magic through this event only for the first time, defies all of Merlin's expectations of hurt and betrayal and takes him by surprise. 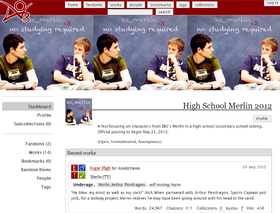 Official posting began May 21, 2012. Challenge entries were posted anonymously to the hs_merlin collection on AO3 and linked to from the hs_merlin LiveJournal community.

Rating: R (bad language only lol)
Pairings: Merlin/Arthur, Gwen/Lance.
Word Count: 25,658
Warnings: None really.
Summary: The waiting is over...let the spectacle astound you as the music of the night comes to a High School stage near you.
Prompt #: 25

Rating: NC-17
Pairings: Arthur/Merlin (side pairings Elena/Leon & Gwen/Lance, brief mention of past Arthur/Valiant)
Word Count: ~17k
Warnings: Age disparity, first times, underage sex, unprotected sex, mention of canon character death
Summary: Determined to get his life back on track after a career-ending injury and a series of missteps, Arthur accepts a coaching position at Avalon School to escape his overbearing father. But fate has her own plan for Arthur and he finds himself struggling against his greatest challenge yet, in the form of a sixteen year old swimmer with a schoolboy crush.
Prompt #: 108

Flow of Age by drarryxlover!

Rating: NC-17
Pairings: Arthur/Merlin, mentioned Mordred/Freya, brief Uther/Hunith
Word Count: ~9,840
Warnings: Homophobic slurs and homophobic violence, male/male sex, age difference (17/30).
Summary: Arthur meets a magical sort of boy, that he falls in love with and remembers loving him in another life. The only problem is, Merlin is seventeen.
Prompt #: 64

Rating: PG-13
Pairings: Arthur/Merlin
Word Count: 1.4k
Warnings: None
Summary: They're paired by their music teacher for their final assessment, a Battle of the Bands-style playoff. Unfortunately, she doesn't know that a bit of high school drama went down at term-break. She doesn't know what this one song she's making them play might mean to both of them.
Prompt #: 60

Out of the Darkness by fr333bird!

Rating: NC-17
Pairings: Merlin/Gwaine
Word Count: 3258
Warnings: Underage in some countries, the characters are 16/17
Summary: A leaky tent on a school camping trip leads to sleeping bag sharing. First times, frottage and fluff.
Prompt #: 1
Author's Notes: I love accidental bed-sharing scenarios, so I grabbed this prompt as soon as I saw it. I hope you like it prompter, thanks for the idea.

Rating: R
Pairings: Merlin/Arthur with mentions of Gwen/Lancelot, Freya/Gilli
Word Count: ~10k
Warnings: verbal and physical bullying
Summary: Merlin has never had a secret admirer before so he’s fairly certain this one has the wrong guy.
Prompt #: 92

Sativa in Bloom (Or, How Gwaine Met Merlin And Everything Went Up In Smoke) by leashy_bebes!

Rating: NC-17
Pairings: Arthur/Merlin.
Word Count: ~25k
Warnings: Underage sex, smoking and drinking (they are 17), self-testing/harm.
Summary: “He blew my mind as well as my cock!” AKA When partnered with Arthur Pendragon, Sports Captain and jock, for a Biology project, Merlin realises he may have been going around with his head in the sand.
Prompt #: 26

Rating: NC-17
Pairings: Arthur/Merlin, Merlin/Gwaine, hints of Vivian/Arthur, Vivian/Cenred, Mithian/Lancelot, Gwen/Percy, past Mithian/Arthur, Sophia/Arthur, Elena/Arthur
Word Count: 44,900
Warnings: The characters start out as seventeen, so underage sex in some countries.
Summary: Merlin is seventeen, in the upper sixth-form and has no boyfriend. He might want one. His best friend, Arthur, is equally seventeen, has been around, and wants to help Merlin with everything he’s got. Cue his matchmaking efforts. Except, being a teenager is more confusing than it seems.
Prompt #: 57

Rating: NC-17
Pairings: Merlin/Arthur, Freya/Gwaine
Word Count: ~ 12,000
Warnings: None
Summary: When Merlin first catches sight of the boy in the trees, he can’t believe his eyes. Could it be him after all these years? Could it be Arthur—the boy that broke Merlin’s heart, the boy he’d tried so hard to forget? It seems Merlin’s past has come back to haunt him, and try as he might, there’s no escaping it.
Prompt #: 46

When We Bleed We Bleed the Same by hms_seth!

Rating: NC-17
Pairings: Arthur/Merlin
Word Count: 12,520
Warnings: Bullying, violence, cursing, hate crime/beating (mostly off-screen), mild (slightly implied) stalking, mentions of insanity, mentions of past character death (what the hell, might as well warn for everything)
Summary: It all would've been simple enough if Merlin had just hidden his magic for a few more months, and not...very publicly used it to save Arthur Pendragon's life. As it stands, things are definitely changing.
Prompt #: 94

tourdefierce wrote After School Special for Prompt #53 submitted by winterstorrm

popfly wrote Fourth and Down for Prompt #15 submitted by drarryxlover

jessa_anna wrote For Every Action... for Prompt #86 submitted by gealach_ros

abjusticc wrote The Kid for Prompt #40 submitted by kattale

Go out with me? by thecheekydragon

It All Started in Detention by disco_mouse!

Summary: A lot can happen in nine days....