Herne's Son is an adult het Robin of Sherwood anthology that ran five issues. It was edited by Linda Patterson.

The adult material in this magazine is being done with the knowledge and permission of Richard Carpenter. 'Herne's Son' was conceived as a magazine largely for the publication of RoS material of an adult nature, although stories from any fantasy universe (RoS included) will be accepted and need not be of an adult nature. However, since RoS fandom was made possible by the imagination and efforts of Richard Carpenter, in accordance of his wishes, we will not be accepting or publishing stories involving 'slash' (homosexual) encounters. It is, after all, his universe.

Herne's Son is an adult publication containing material which may be objectionable to some. Herne's Son is on sale to adults over 18 only, proof of age statement required.

From the submission requests:

Herne's Son was conceived as a forum for publication of adult Robin of Sherwood fiction, though material need not be of an adult nature. Also, we will accept fantasy fiction in any universe, though our format is devoted primarily to Robin of Sherwood.

Guidelines for Adult Material (as per suggestions of Richard Carpenter):

1) Absolutely NO slash (homosexual) material will be accepted.

2) No material involving pedophilia (children) or bestiality (animals) will be accepted.

3) Stories involving Marion will only have her in bed with Robin (either [1]). 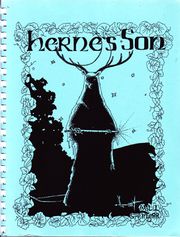 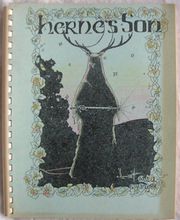 cover of issue #1, the hand-colored run

Herne's Son 1 was published in Spring 1988. It contains 88 pages. Besides the original print run, there were also fifteen copies made that included hand-colored illustrations and the editor and all staff members' autographs. 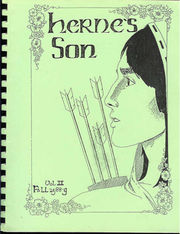 In the zine, 1988 is crossed off in the zine and 1989 replaces it. There is also a handwritten note that the first printing was January 1989. This contradicts the calligraphy on the table of contents page that states "Fall/Winter 1988." 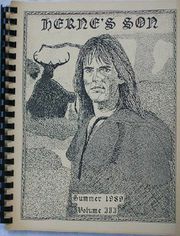 Note: Table of Contents is very faint, and what is transcribed below may have multiple errors.