The H/D Fan Fair is a Harry/Draco fest with different yearly themes. The fest was founded in the tradition of thematically themed H/D fests, especially HD Inspired.

H/D Fan Fair is a Harry/Draco fest, thus all stories and works of art must have Harry/Draco as the primary romantic/erotic pairing. Pre-slash should be marked clearly in the header information. Their relationship doesn't have to be the primary focus of the story/art, but it is important that both Harry and Draco, and the theme of the year, play an important role in the story/art.

For the Career Fair, the participants must create works featuring Harry and Draco work in unusual careers.

These professions are not allowed:

All other professions are permitted in this fest, including unemployed.

For the Travel Fair, Harry/Draco relationship doesn't have to be the primary focus of the story or art, but it is important that travel or being away from home play an important role in the story/art.

The fic or art entries can be either about the journey or take place at the destination, or a combination of each. The destination can be inside of Britain, or in a foreign country, even in space or in a different time or universe.

Here is a list of destination/locations that do not qualify for this fair (unless time travel or universe travel was involved): 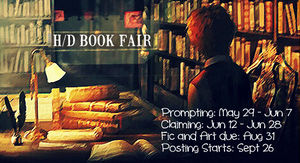 The books mentioned in Harry Potter canon or in Pottermore were the theme of this H/D Fan Fair. Participants created stories, arts or podfics that were in any way inspired by one or more of the over 100 books from HP canon. This could mean that a story, a situation, a character, a spell, a potion, and/or an item featured in one of the books had a vital role in the story/art. It could also mean that one of the books made an appearance in the story/art.

For H/D Pottermore Fair, the participants must come up with prompts, write stories and create arts that are in any way inspired by one (or more) of the new information on Pottermore. A Masterlist of numbered Pottermore entries, with links to LJ and other sources was provided for inspiration. When prompting, each prompt needs to list the number of one Pottermore Masterlist entry that inspired the prompt. "Inspired by Pottermore" can mean that a character detail, a certain back story or a future snippet has a vital role in the story/art. Prompts/submissions may be inspired by the history of a particular place, by the characteristics of a piece of magic or by the nature of a magical creature that JKR has expanded on over on Pottermore.

Pottermore is a jumping-off point for the H/D Pottermore Fair. This doesn't mean that fanworks are *required* to be 100% compatible with Pottermore canon or book canon.

In the spirit of the 2016 Fantastic Beasts and Where to Find Them movies, the Pet Fair was geared towards fics and artworks inspired by any animal, or animal-shaped being and form in the HP universe.

Participants were asked to come up with prompts, write stories and create artworks that are in inspired by:

This Career Fair followed the rules of the inaugural Career Fair, with two additional restrictions for Unspeakable Draco and Curse Breaker Harry. 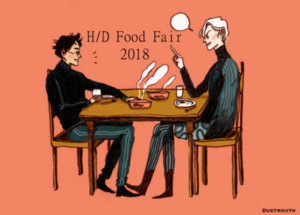 The participants of the Food Fair must come up with prompts, write stories, create artworks and read podfics that feature:

This means that the entries must feature food, or some aspect of it, as the key component.

The Food Fair Cup was introduced to encourage community interaction and fanwork comments. Readers and viewers can answer a quiz to get sorted into one of four teams, Cauldron Cakes, Pumpkin Pasties, Skiving Snackboxes, and Treacle Tarts. To gain points for their teams, participants can leave comments on story or art entries, rec entries, create team anthems, and be one of the top three Guessing Poll winners.

In the end, the The Food Fair Teams have a total of 81 participants, which includes beta readers, writers, artists and mods of the fair. They left a total of 1250 comments.