The Grishaverse is the umbrella fandom based on a number of books written by Leigh Bardugo. It includes The Grisha Trilogy, the Six of Crows Duology, and the King of Scars Duology set in the same universe. They are young adult Speculative Fiction/Fantasy novels. The world and books are notable for their intense worldbuilding, magic system, and magic users.

Leigh Bardugo, has called her blend of Eastern influence and Steampunk inspiration "Tsarpunk." [1]

The verse was adapted into a tv series by Netflix (season 1 released in April 2021.)

The Grishaverse spans a number of book series, listed below in chronological order.

Short stories set in the Grishaverse:

In January 2019, Netflix ordered an eight-episode series based on the Grisha Trilogy and Six of Crows duology, set to premiere in April 2021. The name of the show is Shadow and Bone, like the first book in the Grisha Trilogy.[5] The show covered the events of the first Grisha Trilogy book, and also integrated most of the characters from the Six of Crows duology in a parallel, original sub-plot, which introduced new interactions between characters who do not meet in the books canon, or only at a much later date.

The show was renewed for a second season in June 2021.

Ketterdam, a fantasy Amsterdam [6], is the original setting of Six of Crows.

Other fantasy countries include Fjerda, derivative of northern countries of Sweden, Norway, and Finland; Shu Han, an amalgam of a couple continental Asian cultures, but heavily inspired by China. The Wandering Isle, which evokes Ireland, and Novyi Zem (a 'New World' which is reminiscent of a Wild West-style frontier territory) play a less central role.

Possibly because of Leigh Bardugo's own activity on her Tumblr, the Grishaverse fandom thrives on the site.[7] There are many communities that post daily, host fanevents, and are extremely active. Fanart and fanedits are incredibly popular, and there seems to be a more active artist community than author community.

Six of Crows has been featured on Fandometrics multiple times, and was on the 2018,[8] 2017,[9] and 2016 Top Books lists. In 2018 both books in the duology made it to the top of the list - the only series to be listed by individual book rather than as a series, making Leigh Bardugo the only author listed twice.

Upon Netflix announcing that the series would combine The Grisha Triology and Six of Crows, some fans voiced concerns with the creative choice, especially when it became clear from the promotional material and casting announcements that fan favourites Nikolai Lantsov and Wylan van Eck would not be present in the first season.

The release of the Netflix show prompted a renewal of interest in the fandom, attracting new fans and prompting fans of one of the book series to take interest in the other ones. Some fans wrote exclusively about the tv show canon, which differs in some aspects from the book canon.

Popular ships in The Grisha Triology fandom are:

Ivan/Fedyor (two secondary characters who became a canonical a couple in the tv show) also has a small following. 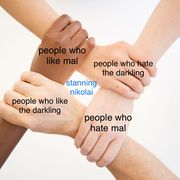 A meme by tumblr user nazyalenskayas showing the the four camps of the Shadow and Bone fandom all agreeing to stan Nikolai.

Throughout The Grisha Triology Alina Starkov has three potential love interests (Mal, The Darkling and Nikolai). This has lead to the fandom being very divided as to who the best candidate is. Primarily the conflicts have existed between the fans who enjoy shipping Alina with either Mal or the Darkling. This means that both Mal and The Darkling get a lot of heat in the fandom, as well as have fans fiercly defending them.

Fans of Malina often argue that Darklina is problematic because of The Darkling's actions as the books' villain. Fans of Darklina, on the other hand, argue that Mal does not respect or treat Alina well.

[worldsinpages]
Why is there so much Mal hate in the Grisha fandom? I really don't understand. People worship the Darkling, but hate Mal. They say Mal acted like an ass in S&S, but nobody thinks it was ass-ish for the Darkling to expand the fold over that entire village in S&B?

Leigh Bardugo's books have been the subject of Readalongs and Challenges on Booktube.

Booktuber withcindy has created numerous videos about the books of the Grishaverse. Including reviews of Six of Crows and Crooked Kingdom, a concept trailer for Six of Crows, a reading vlog of Shadow and Bone, and a video where she messaged people on Tinder only using quotes by The Darkling.

Other popular Booktubers and their videos about the books include:

Leigh Bardugo is on Tumblr, and she often reblogs fanart of her characters, fanedits, and fanmixes. She also has a pinterest board where she posts inspiration, fanart, and canon artwork from the novels.[10] She has attended many conventions, and has been a regular guest at the NYC BookCon since 2017.[11]