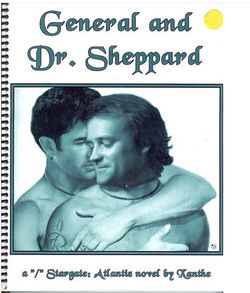 General and Dr. Sheppard is a Stargate Atlantis slash novel by Xanthe.

General & Dr Sheppard is a winner of the 2006/07 Titanium Whip Awards in the categories Best Established Relationship (Slash) and Best Romance Fic (Slash).

"An accident with Ancient technology sucks a John and Rodney from an alternate universe onto Atlantis -- and they have very different ideas about sex, marriage and relationships."

This well thought out story is awesome. It's very well written and interesting. This was the first story I had read of Xanthe's and I'm glad because it lead me to her other stories and anothers. [2]

There are some hilarious moments here and Xanthe’s sense of humour is delightful. I liked the ideas of parallel universe and the same characters from a different universe meet their other versions. Exactly same genes, but they turn out differently because they live in a society with dissimilar rules. I found Rodney in our universe rather annoying at times, sharing the same exasperation the other Rodney had to experience. But ah well, John was determined to have him so whatever makes John happy. :) [3]

I'm sure you all are waiting for me to write a real recommendation and less of the squeeing variety, but part of it is that a) I don't want to spoil it for you and b) I rec because it's easier than writing - as the community icon says.