GAZ Letter to Fanzine Editors, Publishers and Buyers was an open letter by Candace Pulleine. 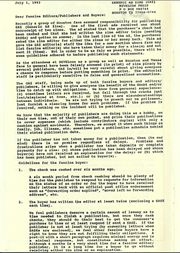 first page of the letter

It addressed the problem of zines paid for but not delivered.

The idea of a regular area in a zine reserved for fans to place notice about such problems; many zines had run a section called personal statements that had included this feature. What made GAZ's service was the intent to become involved by publishing those publishers who were non-compliant.

It is unknown if there had been such a recent spate of issues with fans not getting the things they had paid for, or if the usual places they could complain were not available.

One of the places this open letter was printed was Frienz #23, a Starsky & Hutch letterzine that had recently published a number of letters from fans unhappy with zines ordered from Amapola Press.

Recently agroup of Houston fans assumed responsibility for publishing GAZ (Generic Ad Zine). One of the first ads received was about nonreceipt of two zines. The ad stated that the purchaser's check had been cashed and that she had written the zine editor twice (sending SASEs) and had gotten no answer. In the last line of the ad the purchaser askad the zine editor for either the zines or her money back. This ad gave the GAZ editorial staff the idea for a new section where fans may list fanzine editor(s) who have taken their money for a zine(s) and not sent it (them). But In order to be as fair as possible, there will be some guideline, adhered to before publishing such statements.

We know that the majority of publisher, are doing this as a hobby, on their own time, out of their own pocket, and price their publications to cover expenses (which include contributors copies), with only a cushion against accidents. Therefore, we accept it when such things as family, job, illness, etc. sometimes put a publication schedule behind their stated publication date their stated publication date. If the publisher has not taken money for a publication, then (to our mind) there is no problem regardless of delays. Problems and frustrations arise when a publisher has taken deposits or complete payments for a zine: (a) whose publication has been delayed and whose buyer(s) have not received an explanation for the delay; or (b) which has been published, but not mailed to buyer(s).

Guidelines for the fanzine buyer:

1. The check was cashed over six months ago. A six month period from check cashing should be plenty of time for the publisher to respond to requests for information on the status of an order or for the buyer to have received their letters, back with an official post office endorsement such as "forwarding order expired", "moved left no forwarding address", etc.

2. The buyer has written the editor at least twice (enclosing a SASE each tine). We feel publishers deserve a certain amount of leeway as to time needed to finish a publication, but once they cash checks, they should do their best to get the consumer's purchase to then or at least respond if sent a SASE. If the publisher is not at least trying (by answering letters when SASE. are enclosed), we feel other fanzine buyers have a right to know they are not fulfilling their obligations. A post-it with a short paragraph requires minimal energy and is a minimal response, but constitutes making an effort. Although 6 months is a very short time for a fanzine editor/ publisher, it is a long time for a buyer to go without receiving either the zine or an explanation.

Guidelines for the editor/publisher:

1. After receiving the complaint, GAZ will contact the publisher and give them the information concerning the buyer and their statement of nonreceipt of a fully paid zine(s).

2. The editor/publisher has until the next issue deadline to respond to us and the complainant. Either giving a good reason for non delivery or fulfilling their obligations. If the problem is resolved, nothing on the incident will be published.