Force & Counterforce: Media Science Fiction in Perspective is a gen and het Science Fiction anthology of fiction and non-fiction with an emphasis on Star Wars and Star Trek and Doctor Who. There are three issues for sure, and maybe as many as six.

From the third issue:

Force & Counter Force is a non-profit group of writers and artists with an interest in Star Trek, Star Wars, and media related science fiction. We in no way mean to or attempt to infringe upon rights and cop3aights of the original authors. We extend our apologies to anyone and everyone who might feel otherwise.

[From the third issue]:

Do you write Star Trek or Star Wars fiction, non-fiction or reviews? Are you interested in gaining exposure for your material thorough the fan market? Force & Counter Force is looking for a few good, creative humanoids to join the staff of F&CF, and continue the adventure of science fiction and fantasy that have become the mainstay of today's media SF society. If you are interested, have something to say, or just want more information, contact us.

Force & Counterforce: Media Science Fiction in Perspective 1 was published in 1982 and contains 32 pages. It was edited by Ernesto Salizar.

Force & Counterforce: Media Science Fiction in Perspective 2 was published in 1982 and contains 36 pages. It was edited by Carita Rodriguez. Much of the art is not credited. 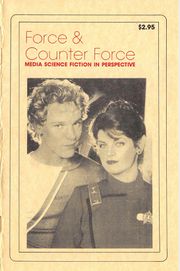 Reactions and Reviews of Issue 2

I don’t like to do reviews. So when I was given a copy of FCF, it sat on my dresser for some time. Of the fanzines I’d given the choice of reviewing, FCF appealed the most to me, perhaps because of its great cover photo of Merritt Buttrick and Kirstie Alley. Finally, there came a Saturday of reckoning. My car was working, the snow had been shoveled, and my apartment was clean. There was nothing else for me to do but to face the copy of FCF on my dresser and deliver one great objective review. ‘Dynasty of Terror’ – sounded a bit heavy for my tastes. The plot as outlined on the first page concerns two new-found offspring of Captain Kirk. The twist is that they are half -Transivian (an almost mythological race of super humanoid bloodsuckers from a world at the edge of Federation space). One would assume from this teaser there would be some violent confrontation, well, maybe next episode. All this one manages to do is get the two aboard the ship and let us know that there is a strained relationship between Kirk and his offspring. On the action side, Kirk does manage to get Kirk knock her up to Warp 8. It seems there might be a skirmish with some Romulans ahead, but alas that too is in episodes to come. This, together with a badly reproduced illo on page two get FCF off to a bad start. ‘The Empire Really Does Strike Back!’ – Wow, this was great! Two fans discuss the ramifications and intricacies of the continuing SW saga. The two ponder the manipulation of Luke by Kenobe [sic] and the ultimate confrontation of ‘The Other.’ I found it to be quite fulfilling and entertaining. Oh, how I wish I could carry on that type of co-operative discussion with all the conversation-hogging egotists I know! ‘Hope Still Left: The Vialaan Project’ – Luke is commissioned by choice to maintenance work in the rebel shipyards. While others take over pivotal roles in this post-TESB episode, it seems as though everyone, including Luke himself, is bent on keeping him in the dark as to what is going on. It contains a subplot about a power struggle among the Alliance. I feel much more comfortable reading this serial than the first one in this zine…. There is the promise of a regular Doctor Who section, started in this issue with a page of comments concerning the Doctor and production standards. Also included is a poem and two good reviews on ‘The Prometheus Design’ and ‘The Magic of Majipoor.’ Yes, I think in this case you can judge a book by its cover. FCF is a beautiful fanzine. The typesetting and most of the illos are professional. It would be improved with more content. Thirty-six small pages don’t allow the serials to do much in the space provided them. [3]

Force & Counterforce: Media Science Fiction in Perspective 3 was published in February 1983 and contains 100 pages. It has a two-color cover by Steven Fox. It was edited by Carita Rodriguez. 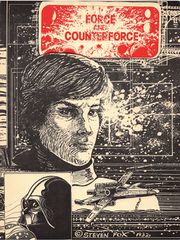 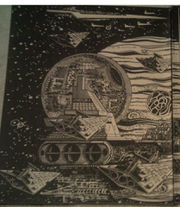 back cover of issue #3, Steven Fox

It contains Star Trek, Star Wars, and Doctor Who material.

From a flyer in the convention program for Love of Trek:

Force & Counterforce: Media SF in Perspective! Star Trek, Star Wars, Doctor Who, F & CF is a media fanzine with an emphasis on the characters that you want to know more about: fictionalized alternative universes based on popular series and movies. 'Hope Still Left: The Vialaan Project' continues the adventures of Luke Skywalker and the brave freedom fighters. What happened after Bespin? In 'Dynasty of Terror,' Captain Kirk battles forces beyond his control and emotion bordering on hysteria. These two sprawling sagas plus articles, short stories, a Doctor who column spell adventure and fun. Issue #3 will be available in February 1983. It will be 100 pages with a two-color, Steven Fox cover.

From E.T. Is Alive and Well In My Closet: A Short Diatribe On The State Of The Nation, which also acted as the editorial:

For many, science fiction is a new thing, but for the more seasoned, it remains unique and fresh. With the change of tastes in the SF community, bold horizons are being conquered on the media front with E.T. and its various associates changing the perspective of fans everywhere. With this in mind. Force & Counter Force, a relatively new undertaking, attempts to expand on some of the ideas about The Force and The Human Adventure, embracing the concept that anything and everything is possible within the confines of the human imagination. Our format is continually changing, evolving into what we hope is a pleasant surprise to you — our readership. Through fiction, speculation and commentary, we try to extrapolate on known characters, extending the horizons of all who come in contact with our fanzine. Our format is now 100 pages long to allow for more variety and spice, advertising and fiction. I hope you like it. We sure had a ball putting it together, writing, typing (this was less exciting), and production.

In our subsequent issues, we hope to keep improving. This time we got the date on it . . . thank you!! And our covers and art have improved. If you have any gripes, suggestions, compliments or LOC's, send them along. Until we meet again, I hope you enjoy our labors. If you are a writer or artist, contributions are welcomed. Length is no problem.