Fireflight is a slash Starsky and Hutch, Star Trek: TOS 95-page crossover novel by Kathy Esselman. Previously published by Twin Bear Press and Half-Size Press. It is digest-sized, and the author writes a dedication to Eileen Roy, Paula Smith, and Susan Verhaeghe.

The cover art is by Diane Hawley. There is no interior art, nor is there any sort of introduction or editorial. 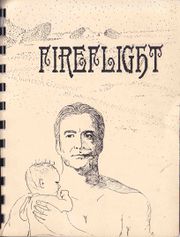 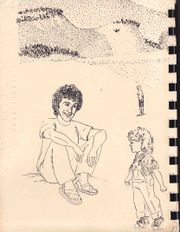 From an ad in Starsky & Hutch Adzine & Newsletter #12:

A crossover with Starsky & Hutch just after "Sweet Revenge" who are visited by Jim Kirk on a mission. A S/H/Kirk/kid [1] & dog novella. 33,000 words. PG-13 for some implied samesex.

From the publisher's ad:

Starsky & Hutch/Star Trek/Kirk & The Kids "/" novella. Kirk is in the 20th Century, Spock is missing and possibly dead. While searching for the Vulcan, Kirk discovers the help of two neighboring cops--Ken Hutchinson and David Starsky, who are trying to solve a baffling series of crimes. It's Starsky's first assignment after barely surviving a shooting, and the two are doing their best to not come to terms what what they mean to one another. When their searches intersect, they discover strength in numbers may enable all to find what they seek.[2]

After Spock is captured by the Romulans, Kirk goes on a mission into the past and meets up with an LA detective and gets involved with the case he and his partner are working on.

This story begins after 'Gunther's Revenge', after Starsky is released from the hospital. He is in a beach house (Hutch’s apartment building has burned) recovering and he meets Jim Kirk, who is renting a nearby house. Kirk has two small children (no, they don’t dominate the story, just add to it). The time period for him is after the end of the five-year mission. At the end of the novel, he decides to take the job of Chief of Operations in San Francisco. Starsky and Hutch finally get to be together as partners on the force after Starsky’s long recovery.

Fireflight, written by Kathy Esselman, is a romantic, PG-rated, S/H-K/S crossover novella, presented here in an inexpensive digest format. As such, it tries for a lot in only ninety-five pages. It needed another twenty to flesh out the story, and eliminate some major plot holes. As it is, a couple of them are large enough to swallow the Enterprise. Don't despair, though. At five bucks, thezine'sacheap slash read.

Standard layout and presentation; typeface a bit large for the digest format, but laser-print clean. It was a nice change from the multiple-reduction, teeny-tiny type of the usual digest-size zine.

This isn't a graphic novel in any sense of the word. No illustrations or intense descriptions of violence or sex. No art, other than the cover. However, that cover scared me senseless. I felt queasy seeing so many children portrayed--I wasn't sure if I'd be able to finish the novel or not (I'm infant-shy, especially when it comes to zines and sitcoms).

The story's strongest asset is the author's solid writing style; its weakest, the rubber science. There are occasional problems with the basics—transition, pacing, and point of view-but her characterization of Starsky shines. He talks and thinks as I'd expect the series character to do. At one point, he's talking with new neighbor Jim Kirk:

S: "What borough are you from?"

S: "The only Americans who can't drive are from New York."

That's a very Starsky line; his accent and background resonate throughout his dialogue.

In contrast, I never fully understood the author's version of Hutch. He kept leaping unpredictably to conclusions that were not supported by any thing in the story, or by a general knowledge of the series. (Starsky recruited by the Mossad or Military Intelligence? Be real! He's a sweet guy, but not their type.) Hutch simply faded into the woodwork for most of the story.

The author's Jim Kirk is too soft for the series character. His life centers around his children (those kids from the front cover, who turned out not to be as irritating as I'd expected). Also, he spends much of the time talking with Starsky about being Jewish in Iowa. (I never thought of Kirk as being Jewish, so the idea hit like ice cubes dropped down the back of my neck-I nearly jumped screaming from my chair. I could never arguemyself into believing the idea on my own, and I received no help from the author. That plot point never worked for me.)

Occasionally, the author hides pieces of information. At one point, Starsky mentions that Kirk had said his daughter, T'Lis, was named after her great-aunt. Since I couldn't remember that scene, I thumbed through the novel to find it. Know what? Kirk never said that. But, hey, the zine's cheap. What do you want for five bucks?

Jim Kirk is on this "research mission to the past" for two reasons. First, his five-year mission is over. Second, his bondmate, Spock, is MIA. Plus there are the children to worry about.

Because of their bond, Kirk believes his lover is still alive; Starfleet insists that Spock is dead. The reader never finds out which is correct. I kept wondering how accurate the bond "echo" would be, since the past and future aren't sequential if you time travel. Like Schrodinger's Cat, Spock would be simultaneously dead and alive. I got overwhelmed thinking about it, and gave up (one of those "science problems" I warned you about...).

Three plot lines make up the novel: Starsky's and Hutch's changing relationship, Kirk's struggle to make a life for his family without Spock, and an action/adventure investigation that acts as a catalyst for the other two. All got short shrift.

Actually, I should be fair. It looks like the author (and/ or editor) got tired of reworking the story and simply decided to publish it. It's not a crime I'd lynch anyone for, but I'm not happy about it.

The relationship plot is hampered by an unfathomable Hutch and unacknowledged scientific implications; most of the action in the action/adventure investigation plotline occurs offstage. When the bad guys are having a crucial meeting, Kirk crawls up a fire escape to tape the proceedings-but instead of listening in on the bad guys' conversation, we sit in the car with Hutch. Then, we get jerked back into Kirk's point of view so that he can think about Iowa. The bad guys never actually show up onstage. They're kept waitingin the wings, except when needed to set off the special effects.

Speaking of special effects, Kirk never sweats pulling information out of mid-seventies computer systems.even though he's not familiar with them. See, the author gives him a computer that mimics all of our computer systems. So Kirk can simply provide all information as it's needed. I'm sorry, but that's bogus. Deus ex machina and mystical plot devices just don't do it for me.

I know, I know, Scotty got real-time, 3-D graphic animation out of a Macintosh during the Wrath of Greenpeace--I mean Star Trek IV: The Voyage Home. I didn't buy it then, either I couldn't get laser-quality output from a Guttenberg press, even if I could hook it up to my Mac. There are synchronization, protocol, and power considerations to worry about when connecting different brands of computers and operating systems. If someone had already gone through the hassle of figuring out the interface, then all of our databanks would be available to the future. No lack of information on the mid-seventies, so no reason for the "research project." See what I mean about rubber science?

The author does portray the drama of daily life quite well. The books Kirk chooses to read ("I, Claudius" and "Admiral Horatio Hornblower"), the dog, Goldie, that runs with Starsky, and the way T'Lis perks up once they get to a hot desert climate similar to the area around her grandparents' house on Vulcan--all true-to-Iife details that give depth to the novel. Dialogue and imagery are handled well. Starsky acts like the series Starsky, and T'Lis- Kirk's daughter-never acts outside her age. Fireflight is a decent story. It's just that, with a little more work, it could have been more. I'd give it three trees, including the bonus points for being cheap.[3]

I've read some completely awful crossovers. I will never forget Fireflight--Trek X S/H Kirk and Starsky bond over their mutual jewishness; the future computers can read 1970's computer 'nets' (like we had them...), to say nothing of Kirk's 3 children...[4]

I really like this little story! It's a moody piece with no spare plot hanging around. You have to think as you read to understand what is going on, and the developing relationship between S&H is beautifully done. Tiny little doses of h/c, and S&H's contact with Kirk, separated from Spock, is bittersweet and delicately handled.[5]

As I recall, I'm the only one who really likes it. :-) It's not a long story more like an episode in the lives of S&H and K&S where the two worlds meet for a time. And I wouldn't call it slash - there's nothing overt. But the relationship between S&H is in flux, getting closer if possible, and I like the sort of sweet mysticism which mists the writing. So, there is a recommendation for you! :-) [6]