Federation Graffiti is a Star Trek: TOS anthology fanzine. It was published in February 1976 and contains 56 pages. The art is by Judy Molnar (front cover) and P. Molnar and C. Torres (interior illos).

In 1977, Who's Who in Star Trek Fandom noted that Judy Molnar was putting together a second issue, but it is unclear if that ever came to fruition. 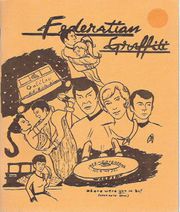 This zine is outrageous -- outrageously funny, that is. A major portion of this first issue centers around a mild, disciplinary rebellion aboard the Enterprise, when a desperate crew adopts the dress, jargon, and general cultural mode of Earth's 1950's period to convince Starfleet of the need for a long-overdue shore leave. The entire crew, including the Captain ("Big C") and a reluctant Mr. Spock ("Da Brains") take part, and while this spinoff from the film 'American Graffiti' may sound somewhat stupid in concept, it works uproariously in practice. Especially delightful are the accompanying cartoons, which have a wonderful incongruity, and the satirized Rock n' Roll song, which are revoltingly funny. ('Chantilly Lace' and 'Rock Around the Clock' get the treatment, among others, and the parodies will make you grimace with pleasure, even if you don't exactly remember the songs in their original versions.) The single most humorous piece in the issue, probably because it wasn't intended to be funny, is a two-page creation of 'The Creation of Spock,' a glorious dollop of KITSCH based on Michelangelo's 'The Creation of Adam,' and is complete with the fingers touching between Sarek and a fully-uniformed Spock, with Amanda looking on. Technically, the painting isn't bad, but conceptually it's just too much to take seriously. The non-humorous material in the zine is mediocre. Kathy Dunn's 'Beginnings' is another 'poor little-boy-Spock' story, told (naturally) from Amanda's point of view. The story has nothing new to say, though the writing shows promise. Candy Torres' series of poems, one for each crew member, are severely damaged by mediocre accompanying portraits and a terrible layout (too much space allotted to the drawings, and they overwhelm the page). The poems themselves are competent if you can escape the influence of the drawings. (I finally had to cover the drawings with my hand while reading the poems in order to try to appreciate the poems in their OWN concept.) Other materials is the issue are forgettable. If you appreciate satire or nostalgia, you'll enjoy Federation Graffiti. Humor is the zine's strong point, and I still grin every time I remember one of the cartoon, which has Spock in a black leather jacket and scarf, standing behind the 'Big C's' command chair, thinking to himself, 'Surak must be turning in his urn. [1]