Elicia Donze, who went for a very long time by the alias Euclase, is a very well known fanartist who is mostly active in Supernatural and Star Wars fandoms. She is known for her photorealistic paintings. They are often so similar to the template that some fans accused her of cheating.[1]

Despite these accusations, she often posts in-progress pics and shows how she uses references to inform her work.[2] She is an avid activist, and will often post advice to artists on her blogs encouraging them to keep drawing. She also gave an interview on the OTW's blog, posted on May 28, 2017.[3]

On 27 June 2014 she temporarily made her art unavailable after receiving anon hate, leading many to believe that she had left the fandom.[4] This caused a huge stir in the SPN fandom, with many fans sending her support, condemning online bullies, and asking others to support fanartists more. Euclase explained one day later that she only meant to take a break, but then deleted the post.[5] Anons at Fail_Fandomanon described her as wanky, pointing to previous flounces and her refusal to turn off anon commenting despite receiving anon hate on her Tumblr.[6]

She was intervied in OTW Guest Post: Euclase in 2017. 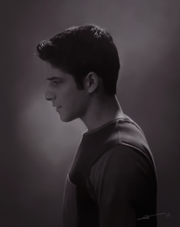 digital painting of a Teen Wolf character; one of many photorealistic portraits by Elicia Donze

This person is effing amazing. When I saw her art for the first time, I literally could not believe it was real. When you consider how much time, effort, practice, technicality, sweat, blood, and tears go into a piece, and then see that that amount goes for every. single. effing. painting. that. user. has. made.[7]

there’s something about euclase’s art that sort of mystifies me. i don’t know. it’s so, so, so detailed, it’s almost unreal. she’s a master of lighting and portrait. her fan art concepts are gorgeous. everything she did was worthy. i thought she deserved to be on museum walls. if you’ve ever seen her art you know that it’s not fucking around. it’s some seriously work. [8]

Your art is AMAZING! I am not saying this because everyone else is, or because it is the right thing to do. I am saying this becaus eit is amazing. Pure and simple. I have never seen such perfect pieces of art that had every stroke, colour, and brush accurate to make piece of work which look as highly defined as a HD Photograph.[9]