Eclipse is a 53-page gen Star Trek: TOS novel by Wendy Rathbone. It includes some Wrath of Khan poetry and two illos by John Runk.

one version of the cover 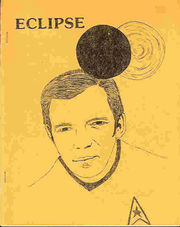 From Media Monitor: "Captain Kirk must face his past or lose command of the Enterprise because of recurring blackouts which threaten his ability to command. Also, Star Trek: The Wrath of Khan poetry by Rathbone, Story and poetry rated PG."

From the Author's Forward in the Zine

The story "Eclipse" came out of a desire to write in a straightforward manner about the purely human problems even' "the more heroic of heroes can experience. I've always asked questions about the Star Trek characters because they are so compelling, so human and yet almost stronger than human. I love to speculate on various aspects of their lives from childhood and on into the future. In the case of James T. Kirk I am awed at the amazing strength he seems to possess which enables him to go from one traumatic event to another and still care out healthy and whole in the end. Well, everyone has their limit and to make my story more interesting I decided that I would write about something from his distant past which has caught up with him and won't let him alone. It is something from Kirk's childhood which now begins to severely affect him - not an event from aired Trek, as I would have chosen to do. I wanted this to be different, to share some other aspects to his character that we Star Trek fans may never have glimpsed before (except maybe in other fan fiction.) I wanted to show that even starship captains are human, and a certain Vulcan is more human than he cares to admit. That is not an insult - By human simply mean 'believable person.

In the story I created two sisters for Kirk. They are twins, two years older than Kirk and they hopefully help show his character in a realistic vein. The WRATH OF KHAN poetry series is something that came out of a love and certain understanding of the characters and situations in that movie. Two of the poems have been printed in "The Shatner File," the William Shatner Fellowship monthly newsletter. I include them in my series here because probably a lot of you haven't seen them before and because they are all part of the set. As far as criticism goes... Be nice. If you don't have anything nice to say, then I probably don't want to hear from you. I'll answer all mail if accompanied by a S.A.S.E. Otherwise, I just don't have the funds. Basically this story was written for fun and that's how I want it, read, for fun. Of course it's serious but it is also entertainment and if there are bloopers or flaws, please just overlook them. Nobody's perfect.

I want to thank Linda Perez for her help on the second part of "Eclipse." Thanks, Linda, for sitting dawn and talking to me until I could see it all a little more clearly and for listening to me babble on and on about my ideas and new scenes I'd just written. Also, thanks to Della Van Hise for listening, letting me use her typewriter, putting up with my moodiness and encouraging me in this. She said quite encouraging words to me like: "You're crazy if you want to do a zine" and "You don't know what you're getting yourself into, kid." I also thank John Runk whose two illustrations in the middle of the story "Eclipse','" add mood and character exactly as I intended in the writing.