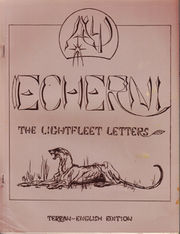 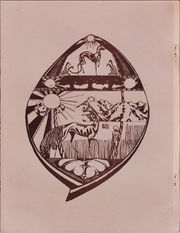 On the cover: "Terran-English Edition."

From the author's introduction: "The letters were were begun 11-12 years ago by Virginia Tilley and Cathy Minks. Through the years, with a changing cast of writers, the Letters have been written for one purpose - the enjoyment of the writers."

The zine is composed of a series of letters written by characters in the shared universe, Alternate Universe 4 It was the last in the series. Kirk, Spock and Dr. McCoy do not appear. The zine also contains a 24-page very, very dense appendix of language instruction, glossary terms, and explanatory information about the universe.

Some of you are thinking, "Ah-ha, Echerni - The Lightfleet Letters, brought to us by those marvelous people who wrote ALTERNATE UNIVERSE IV." Actually, that's not correct. AU4 was brought to you by the marvelous people who write the Light-fleet Letters. The Letters came before - long before AU4 - and continue after it. The action in Volume I was independent of the Letters; the war in Volume II was first fought in the Letters; the events in Volume III (not yet available at the time these Letters are first published) are once more independent of the Letters. The events in the Letters take place after Volume III. The same characters appear in both, with this exception: Kirk, Spock, and McCoy have no part in these letters.

Those of you who write, and those of you who've ever listened to writers try to explain how they do what they do, know that there is more than one method of developing background - building your Universe. The Lightfleet Universe, an off-shoot of Gene Roddenberry's Star Trek Universe, was built through the Letters. They were begun 11-12 years ago by Virginia Tilley and Cathy Minks. Through the years, with a changing cast of writers, the Letters have been written for one purpose - the enjoyment of the writers. The characters in the Letters and the Universe in which they live grew and developed as the writers grew and developed, becoming to a large extent independent of Star Trek. The Letters you have here in your hands were written by three people: Anna Mary Hall writing for Thia Chenen and Qbar Rium; Daphne Hamilton writing for Dival Raithan and Staav Morel; Virginia Tilley (Quism) writing for T'Ares Malon and everyone else not identified here by name.

If any of you are wondering why Shirley Maiewski's name isn't on any of these letters, her character, Neran Lansenahl, and his newly refurbished ship, the LFC Farinian, had left on a new assignment, deep space exploration, and missed the whole show. Shirley is involved in the Letters as co-editor, critic, assistant-proofreader and nit picker, typist, and publisher.

There is a Velonian language and it is used to a limited extent in these letters. ((Not as limited as we thought! - DH)) Longer passages will be footnoted, but individual words and short phrases can be found in the Vocabulary in the back of the zine. The Vocabulary contains a pronunciation guide for the benefit of you non-Velonian speakers. There is also a Name Glossary that gives the correct pronunciation of names and terms and brief notes on them where we think necessary.

Echerni, which means 'messages' in Velonian, is just that, messages sent between friends and colleagues during a crisis. Some are personal and some are professional. Actually, there are simultaneous crises. One is the ancient Shevian computer, who is not quite sure that the Velonians are really descendants of Shev, which while communicating telepathically reveals all of their many self-deceptions shattering and incapacitating a good many of Lightfleet personnel. The second crisis starts with the first contact of a new telepathic extra dimensional race, the Baannun, who speak of peaceful intentions, but whose actions speak otherwise. Together these crises rock the very foundation of Lightfleet. I hate to give away much more of the plot, so I won't. The characters are so real that many times their pain and anguish are almost a tangible presence. This story is far from all sweetness and light! The letter format took some getting used to and I can't say that I would like to read a lot of stories this way, but it is effective. It causes the story to be somewhat disjointed and unless you already know the characters from Alternate Universe 4, (except for one couple) the reader is unaware of the writers' relationship or gender until the end. I also found it to be distracting to be running into Velonian terms on every page and looking them up until I started ignoring them and just read the story. I respectfully suggest to anyone who hasn't read 'Alternate Universe 4' (or like myself, have not read it lately) to turn to the Appendice first, especially numbers 3, 4 and 5. It will enhance your enjoyment of the story. [1]

These purport to be the letters, memos, notes, and communiques to and among various of the Lightfleet personnel of the Alternate Universe 4 created by Anna Mary Hall, Daphne Hamilton, Shirley Maiewski, and Virginia Tilley. Because it has been some years since I last read any of the AU4 stories, I found the incidents told in the etters hard to follow. If the reader is not already familiar with the characters and attitudes of this series, she will not find out much more about them through these letters. The correspondents all sound alike and the incidents they relate are fragmented throughout several letters. I am also bothered by some logical gaps; one epistlearian crashlands on a planet and is stranded there with her crew, yet somehow —God knows how—manages to get off a chatty message to her captain. Not to rescue her, you understand, but just to let her know what's happening.

On the other hand, if one is already immersed in the Lightfleet universe, these contain valuable background. I'd recommend that one reread the stories before trying the letters, however, but there are appen dices of names and terms for the new read er. Telas (James Kirk) does not write or receive any of these letters.

The story... consisted of an exchange of letters between two of the characters of AU4. Echerni received a quieter reception from fandom than the previous volumes, possibly due to this format, which is a more difficult form of storytelling. [3]