Dream Daddy is a dating simulator game written by Vernon Shaw and Leighton Gray, and directed by Tyler J. Hutchison. However, its claim to fame is its sponsorship by Game Grumps, who did some of the voices.

It has a variety of father characters to ship. You can meet all their children, who have varying personalities and levels of relevance. Your character also has a daughter.

It is notable for its inclusion of trans options and characters, such as having a set of body models wearing binders in order to give a transgender option for those who desire it in the main character. It also lets you pick if your daughter is biologically yours or adopted.

There are multiple endings, depending on how well you court your chosen daddy. You can date more than one daddy at a time as long as you don't get too serious with them, but eventually you have to pick one.

There was an outcry on twitter and tumblr when the artist ohnips drew the characters genderbent to "Dream Milfs", particularly where Damien and Brian are concerned. Threats were sent to ohnips to the point she considered leaving social media[1] 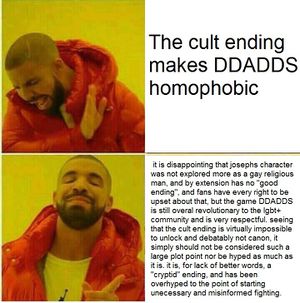 There was also an outcry over the deleted ending where Joseph is a cult leader, which was seen by some as a homophobic trope. However, many opposed this view, with one artist creating a meme stating

it is disappointing that josephs character was not explored more as a gay religious man, and by extension has no "good ending", and fans have every right to be upset about that, but the game DDADDS is still overal revolutionary to the lgbt+ community and is very respectful. seeing that the cult ending is virtually impossible to unlock and debatably not canon, [...] it is, for lack of better words, a "cryptid" ending, and has been overhyped to the point of starting unecessary and misinformed fighting.[2]