Discovered In A Letterbox

From Fanlore
(Redirected from Discovered in a Letterbox)
Jump to: navigation, search

Discovered In A Letterbox (also known as "DIAL") is a Professionals slash letterzine published quarterly in England by two successive editors (Jill R. to issue #14 and S.W. to issue #24) from 1997 to 2002.

After issue 24, DIAL was taken over by a fan in America but despite many promises,[1] no other issues were ever produced.

The Best of DIAL: 1997-2002 is a collection of stories from issues of the letterzine and was published as a thank you to subscribers when the letterzine ceased publication.

Contributions on disk or e-mail were welcomed (formats: Word for Windows 2, WordPerfect 5.1. or Text-only). 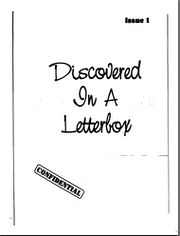 "EDITORIAL POLICY: The idea is to foster good-humoured conversation; therefore, the opinions of other subscribers must be treated with respect. Any criticism of a named author or story must be positive in tone. I reserve the right to edit letters, reviews and articles. Contributions of whatever kind may be published under pen-names or real names, whichever you prefer; please make your intentions clear. If any part of your letter is not for publication, please make that clear as well."

The goal was to cover as "wide a range as possible: letters, fiction, reviews, artwork, a bulletin board for adverts and wants lists, zine flyers, news of the actors, story ideas, convention details, forthcoming publications - fill in the gaps for yourselves. Feel free to write on anything you'd like to discuss, from suggestions for what the zine should include to debates about your favourite stories."

Fiction that had not yet been widely circulated and art was welcomed. The editor also indicated that she did not want the letterzine to be posted online.

The general contents of the letterzine varied over time as new sections were added or removed. But the initial issues contain the following: