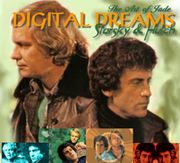 Digital Dreams: Starsky & Hutch ("The Art of Jade" on the cover) is a CD created by Jane of Australia.

The STARSKY AND HUTCH DIGITAL DREAMS disk is a treasure-trove of over 600MB of goodies which begin with 100 original wallpapers featuring the spectacular digital art of Jade ... but the disk contains much more.

1. 100 wallpapers, as sampled online here, PLUS
2. A picture archive of 300 fresh images available nowhere else!
3. 10 screen savers compiled from the wallpapers, with genuine 'installers. No copying files to Windows;
4. Around 15 minutes of videoclips!
5. Slideshows demonstrating each of the screensavers before you install;
6. LOads of slideshows featuring the archived JPEGS, with music;
7. Complete instructions for installing wallpapers and screensavers;
8. A velvet smooth Macromedia interface for PC

The disks ship for US$12, all-up, including insured airmail, which is around a nickel for each wallpaper, while the 10 screensavers and 300 other high-quality images come along at, well, no extra charge! Which is one heck of a deal. [1]

Similar fanworks are The Starsky & Hutch Media Archives and Digital Dreams: The Professionals. A Sentinel one was also planned, but likely fizzled. See below.

So what happened to the CASCADE VISIONS CD-Rom???

It's still being done, but ... differently. We just had a not-altogether pleasant experience with our first direct zine-to-CD project. Sales were very small (under 30), and this is more than likely because it may have been poorly reviewed on the lists. It took six months for us to track down why some readers had not liked the disk. But eventually we did learn that for at least a significant percentage of the fanfic world, readers have little or no interest in graphics, photos, videos, animation, sound bytes, full color paintings, music videos, special effects, and all the other things which to us are so great. They want only the stories; what were termed 'the bells are whistles' are unwanted baggage. Moreover, readers wanted to be able to get into and out of the disk instantly, and go right to the stories: the 20 second videoclip intro and close-out sequences which we'd installed on the Cross My Heart #14 CD-Rom to represent the zine-cover and the on-screen credits, were enough to put off some users. Further, not everyone wants to read on the screen; they want to be able to just print the zine out. In the interests of trying to control the fate of the stories (keep them from free-distribution at least in the short term) we installed a print-manager on the CMH #14 disk that allowed the generation of draft quality copies, not printer-ready zine pages ... and of course a few people discovered how long it takes, and how much it costs, to print out a zine-thick wedge of paper! Finally, we can't make a true multimedia disk for Mac, which leaves 10% or so of users 'out in the cold,' and feeling annoyed, which is never a good thing ... and/but what really took us by surprise is that some readers are still using systems too old to play multimedia in any case (another 10% of the community???) We genuinely thought that pre-1997 PC systems had all gone to computer heaven!

All these things make us very reluctant to put CASCADE VISIONS on a CD as a zine-on-disk. The experience with CROSS MY HEART #14 showed us, people want PAPER zines, no matter the fact that they're expensive to print and mail! But..

This doesn't stop us doing a CASCADE DIGITAL VISIONS CD-Rom. It will be an addition to the zine(s) ... it will have all the aforementioned goodies: all the color photos, the graphics, wallpapers, videoclips, animations, morphs, sound bytes, full color paintings, music videos, special effects... the only thing it won't have -- the stories. On the disk, you'll get whole libraries of JPEG photos (over 1000), wallpapers for Mac or PC, a collection of sounds and videoclips, and the FLYERS, teasers and sample chapters for the stories. But right at the point where most people would be looking for the 'print' button, we'll hand the production over to the paper zine.

You'll be able to buy the zine without the disk, of course, if you genuinely have no interest in having all that stuff. Getting the disk/zine combination, the disk will be slipped inside the zine... and you'll be able to get the disk without the zine, too, in which case it will be in its own cD-case, like the DIGITAL DREAMS: Starsky & Hutch and Pros disks.

Lastly, we've been able to address the problem of compatibility with Mac: a Mac version of the disk will be done using Javacript. A welcome page will pop open Internet Explorer, and then the all-singing, all-dancing show will run inside a Java environment. The only point we have to make here is, Mac users who are running Netscape ONLY, and have a moral aversion to Internet Explorer, won't see a majority of the show, because Netscape is incapable of handling all of the code. However, *any* Mac or PC users will be able to access the resource libraries, and we urge the Mac user to bend the rules in this one instance, and run Internet Explorer, which *can* handle all of the code!

So here we are: CASCADE VISIONS has turned into *three* zines and a CD, which give readers total control over what they want: you order only the content you want, you don't have to get a page or a disk you don't need!

Incidentally, we'll be offering a package deal: 1, 2 or all of the zines, plus or minus the CD-Rom, plus or minus the coasters plus or minus a set of wallet photos which can be added into the 'full package' for about an extra three bucks! All info will be on the new CV webpage in a couple of weeks.

If you have ANY questions about Cascade Visions, then please email me at dldownes@...[2]