Diamyien is a slash Professionals anthology. 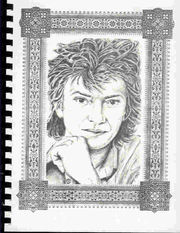 Diamyien 1 was published in 1990 and contains 214 pages. Front and back cover by Tammy. Interior artwork by Tammy, Lace, F.M.T., and Mouse. It was also issued in a no-frills edition at some point by Nut Hatch.[1]

Jungle Ghosts (Raist) D and B are a bit at odds in their relationship. Then Doyle's car explodes. Since Bodie doesn't know Doyle had a warning to get out of it he thinks Doyle is dead until the analysis of the car leftovers shows that he can't have been in the car. It turns out a man called Saunders from Bodie's mercenary past has kidnapped him to take revenge on Bodie. Bodie follows some clues and is taken prisoner by the mercs, too. By beating or torturing Doyle (not described), Saunders forces Bodie to go and search for some information they want. Bodie, Cowley and some other agents free Doyle who needs to go to hospital. Bodie visits him and they come to terms with their relationship. No sex. Nice for h/c I think. Not a bad story but I wasn't overly enthusiastic either.

Ritual's End (Tessa Rae) (Sequel to Ritual Cleansing) Picks up on a situation in which D and B have broken up and Doyle has left CI5 and works in another town at a gas station. Bodie finds him (several months after Doyle left) and they get together again. Seemed a bit strange to me, probably because I don't know Ritual Cleansing.

Labrinth (sic!) (Mouse) The plot is basically the one of that movie with David Bowie where a teenage girl accidently curses her little brother to be taken by the goblin King and then has to find him in a maze. Bodie in the role of the abducted brother. The goblin King wants to keep him to have sex with him. Doyle goes through the labyrinth and finally gets Bodie back. Nice for fantasy fans. Very little sex.

Twisting the Strings of Fate (F.N. et al.) A young boy, a friend of Doyle has watched some bad guys doing something. They see him talking to Doyle and assume he has told him. They kidnap Doyle, rape him (graphic, but short), beat him up badly (not described) and leave him in an empty house to die. He is found however and brought to a hospital. (Very long scene in the ambulance, with lots of medical data about his heart rate, blood pressure and such). Most of the (long) story is about Bodie visiting Doyle at the hospital. Over discussing the rape Bodie lets Doyle know how he feels about him. Love and friendship. No sex (except the rape but that didn't really count). Nice h/c story.

The Magician (Shan) Fantasy story about Bodie being apprentice to a magician. He meets Doyle who is a cook in the market and convinces him to live with him and his magician master. Of course they fall in love with each other. Some funny moments, e.g. when Bodie tries to cook and always ends up with rats in the souffle he tries to make. I didn't like the story overly because I don't want to see B and D in a fantasy environment, but that's a matter of individual preference, of course.

Close Encounters of the Fourth Kind (Lea) Doyle as an alien from another planet that is destroyed, looking for a new home. He meets Bodie in a lonely place in the mountains. Bodie gets hurt and Doyle takes care of him. Eventually Bodie discovers the truth about his new friend. They fall in love. Too much fantasy for me again. (I love fantasy and sci-fi, but not with B and D).

Shadow Master (Lena) Kind of a prose poem about an incubus visiting Doyle.

The Dancer (Shan) B and D visiting a night club to see a male stripper called Ray Dennis who resembles Doyle. They conclude Doyle could have done it better. The point of the story is that at the beginning it's not clear that the stripper is not Doyle. Very short story.

Devil's Walk (P. Willow) My favorite (and the longest) story in this zine. A/U. Doyle gets shot in the knee at an op, and his partner (not Bodie!) dies. Even though the knee heals weel he can't walk afterwards for psychological reasons. Cowley sends him on vacation and Doyle goes to Bangkok to participate in a chess tournament. Cowley calls Bodie who lives in Bangkok with a family who adopted him and asks him to watch over Doyle. They meet but Doyle doesn't know that Bodie knows Cowley or about the order to watch over him. Bodie soon falls in love with Doyle, but it takes some time until Doyle trusts him enough and can be seduced. The family doctor of Bodie's family treats Doyle's knee and Bodie helps him a lot with the often painful exercises. Oh, I forgot: Doyle has to use clutches or wheel chair all the time. Very nice development of relationship. Nice sex, too, but not very much. Of course, some misunderstanding happens after a while which makes Doyle believe that Bodie has betrayed him. Doyle flies back to London immediately. Bodie follows. He gives up his life in Bangkok and becomes Doyle's mate in CI5.

Reading this paragraph again it doesn't sound like a very good plot but the author makes it very believable and I found the story very enjoyable to read. I think h/c fans would love it.

There are several poems, too, but I'm not really into slash poetry, so I don't feel qualified to comment on it.[2]

In my handy Pros database, something called "Diamyien" is marked as "run away" - can't remember why.[3] 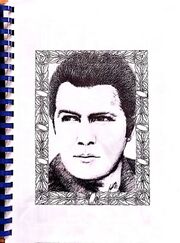 Diamyien 2 was published in 1991 and contains 150 pages. It was also called, "Diamyien Too," and its format was a little smaller than the first issue. (another source says 172 pages) Artwork TSL, FMT, and Mouse. Front and back covers by Tammy.

When Nut Hatch reprinted it, their flyer said: "An encore of the first issue, a little smaller in size, but otherwise like a 'curtain call!' Lots more good reading, at a lower price, for a slimmer zine. But the contents are just as rich." [4]

The stories all have a supernatural focus: "Halloween issue - stories of the supernatural, vampires, ghosts and ghoulies, and things that go bump in the night!"

Summaries below are from The Hatstand.

[Penhallwick Hall]: This is a supernatural story that started out alright - not sparkling for me, but okay - and then totally lost me when it brought in the supernatural element. It almost felt as though there was a piece missing, explaining how the lads became involved with the Well. And I like Pros-y spooky stories![5]