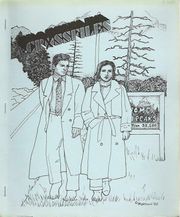 The cover title has the "O" crossed out with an "X." 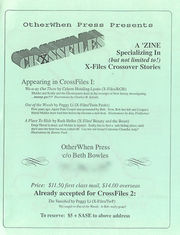 CrossFiles is a gen 66-page anthology of three stories, each a crossover.

There may have been two more issues published. A 1995 flyer says that a story for issue #2 has already been accepted: "The Vanished" by Peggy Li (X-Files/Twin Peaks) The sequel to Out of the Woods. "Is Bob really gone?"

Supposedly the Subject of Some Unwanted Attention

Putting a zine on the Net is only tempting fate. The PTB have copyright and trademark police out trolling for infringements. A woman who agents Lois Balzer's t-shirts for her put an ad for the shirts on her Web page. Soon after, she was hit with a C&D by Twentieth, telling her that they were going to confiscate all of the X-Files tees and slap her with a fine, to boot. Back in April, Beth Bowles received a C&D for her zine CrossFiles (X-Files crossovers), because she advertised on the Net using only her pressname. She looked like a professional, and Fox's lawyers went after her. She explained that her publication was a fanzine, but has heard nothing more from them on the matter.

Copyright holders have looked the other way as long as we've remained fairly low-key about zines -- but make no mistake, if we become too visible, they'll be after us. Word from Bill Hupe is that Paramount will shortly be coming down on Trek zineds -- they won't take any action against zines already in print, but no new zines will be allowed to be published. [1]

Illustrations by Bonnie Funk (Beauty and the Beast crossover) (10 pages)