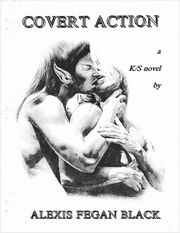 inside pages, one with a warning to would-be copiers

Covert Action is a K/S slash Star Trek: TOS novel by Alexis Fegan Black. It was published by Pon Farr Press in 1993 and has 130 pages. 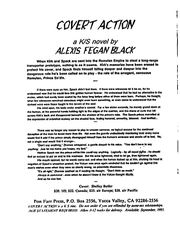 When Kirk and Spock are sent into the Romulan Empire to steal a long-range transporter prototype, nothing is as it seems. Kirk’s memories have been erased to protect his cover, and Spock finds himself falling deeper and deeper into the dangerous role he’s been called on to play – the role of the arrogant, sensuous Romulan, Prince Sa’din. [1]

Spock goes undercover as a Romulan prince to steal the prototype of a long-range transporter, with Kirk as his mindwiped pleasure slave.[2]

There was no longer any reason to play to unseen cameras, no logical excuse for the continued deception of the man he loved more than life. Not even the guards undoubtedly monitoring their every move would find it odd if the prince simply disengaged himself from the human’s embrace and strode off to bed. No, not a single soul would find it strange –

“Don’t say anything,” Zhames whispered, a gentle despair in his voice. “You don’t have to say anything. Just let me make you happy, my lord.”

Neither Spock nor the prince-within-him could say anything. Logically – by all moral rights – he should find an excuse to put an end to this madness. But his arms tightened, tried to let go, then tightened again.

His mouth opened, but no words came out; and when the human looked up at him, shaking his head in negation of Spock’s unspoken protest, the Vulcan was once again reminded that he couldn’t go against this man’s wishes even when they were so clearly wrong, so potentially disastrous.

“It’s all right,” Zhames soothed as if reading his thoughts. “Don’t think so much.”

Always in command – even when he doesn’t know it, the Vulcan thought dizzily.

And so he was lost.

In April 2010 jou posted a fanart illustration for this novel, Sybilline Verses, or the Mirror of Fate.[3] In August 2010, the art went briefly offline.

The zine produced a wide range of reactions with most fans either loving it or hating it.

I enjoyed reading Alexis Fegan Black's latest novel, Covert Action. I stayed up past midnight to finish it. It has been a long time since a K/S story has immersed me so completely in its action.

And this is quite unusual for me, because I frankly am not a big fan of AFB's latest writing. I generally disagree with the characterizations, and I've grown very weary of the portrayal of Kirk and Spock's sexual relationship as one of dominance and submission, with all sorts of kinks and quirks thrown in.

But I could see many differences in Covert Action. For one, the two "spanking" sequences, which normally would have really turned me off, were well integrated into the plot, and not only that, they were reciprocal! And Spock's relationship with Kina was not wearily detailed for page after excessive page, but was succinctly put, and also was an important and believable part of the plot.

I felt that AFB followed her typical formula, but modified it. Part of that was allowing Kirk to be what he is, a forceful man with a forceful personality, even when it was submerged within Zhames' persona. I especially liked the ending, for it opened the possibility that Kirk and Spock's new intimate relationship would be a balanced one. Strangely enough, although in most of CA Kirk isn't really himself, I thought that the characterization of the captain was more on target than in anything the author has written in a long time.

Part of the modification was allowing Spock to have previous sexual experience, but not rubbing the reader's nose in it, and not overloading those previous relationships with gratuitous kinkiness and an excess of sexual devices.

I didn't catch the fact that Kirk had returned to awareness, overcoming Zhames, until the sequence in the shower when he tells Spock, "I love you." A friend of mine who has also read CA claims that she realized Kirk was back when he returned to Spock's side in the orgy scene and said on page 99, "Make love to me, Spock." The use of Spock's name was the tip-off for her, but I just assumed that it was another slip as Kirk/Zhames had done before. Which was intended, a clue for the particularly astute? Tantalizing those who wondered? I must confess it went right over my head. But I loved it when the shower realization hit me.

Nobody in fandom knows how to develop sexual tension like this author does, and nobody writes a sex scene half as well either. But there were a few problems, or glitches with the story. Not that they interfered with my enjoyment in any substantial way, because I allowed myself to be swept away by the atmosphere.

Sending Kirk to assassinate Tal when the possibility of recognition was so great made no sense to me at all. Likewise, there was no indication in the story that Kirk had homosexual experience of any kind, so I wonder at his ability to "go down" on Tal so easily. This is a skill that is learned and an inclination that defines sexuality. If the "Zhames" persona was not strong enough to overcome Kirk's memories, etc., as was cleverly and clearly detailed, then how did Kirk/Zhames have the expertise and the gusto to "perform" on Tal so well? I also wondered at his easy acceptance of performing sexual acts with/upon Tal once "Kirk" had returned.

It's possible that in my headlong rush to finish one of the best K/S stories that I've read in many months that I missed this next issue. But on page 9 Kina is "altogether human." If that's so, how come she didn't need the same protection against telepathic detection that Kirk did? I know she was a secret agent, and therefore I assume there was some protection, but I never noticed that it was specified, so I was constantly wondering.

When Zhames/Kirk and Spock finally do make love in the orgy scene, yes, I believe that it was a defining, shattering moment for the two of them, but no way do I believe that their love-making would have been perceived as anything out of the ordinary by anyone watching them. Two guys fucking, a prince penetrating his slave, what's so unusual about that? Who's to know, even the Praetor, that it's the first time for them, that it's the culmination of so much between them? I simply don't believe that anyone not intimately involved in the act would have perceived the intensity or the emotional/spiritual depths that were achieved. It's unrealistic.

And would Spock really have misinterpreted Kirk's "playful threats?" (pages 111 and 112.) The Vulcan who denies and denies, who can't accept the charged emotions between himself and his captain is a K/S cliche. He's lived with humans for many years, specifically with Kirk for several. How could he possibly misinterpret what Kirk really meant, therefore giving him the opportunity to deny? It's cliche-irritating. Having the Praetor intervene in the mission and hand over the plans for the transporter seemed like a cheat to me, a deus ex machina solution that had very little to do with the careful development of characters and plot line. However, I do see that in a way the author had written herself into a corner. Clearly, another subplot would have had to be introduced, and the story would have had to be considerably longer to have incorporated the transporter plan theft into the plot in a realistic way. As it was written, the plot really had no where else to go.

Which leads to another comment, that this story is clearly not a novel, but is a novella. I'm a fast reader, but not that speedy, and Covert Action took me less than four hours to read. Plus, the action, while compelling and very interesting, was also mainly linear. I think of a novel as a woven tapestry, with many threads and complexities, ultimately gathered up into one colorful knot in the end. To my way of thinking, "Covert Action" needed that extra subplot I mention above to make this story a complete work and a real novel.

As I said, these problems did not really interfere with my enjoyment of the story. Since my first reading, I've actually re-read certain parts, a sure sign that I've found a story I like. I really, really liked Covert Action, and I consider it a breakthrough in Alexis Fegan Black's K/S writing.[4]