Collage is a bi-weekly zine which has a focus of comics and science fiction. It was edited by G.B. Love and James Van Hise, the two fans who produced Enterprise.

On the back of each issue: "Collage - Fandom's Fastest Fanzine."

Collage 17 is undated and contains 15 pages. The cancelled stamp used to send one of these issues was February 1972. 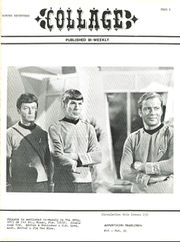 From the text of the pamphlet shown below:

In the upcoming 1967-68 season, the U.S.S. Enterprise will continue on the audience-winning course charted by series creator Gene Roddenberry in his STAR TREK writer's guide. Believability [sic], the very first point underlined in this guide, is probably the key to the series' popularity with better educated, more discriminating viewers. Each STAR TREK episode is packed with action and adventure, but the characters and plot situations are never allowed to veer away from the immutable truths of human nature and a solid platform of scientific fact. No less an authority than Dr. Isaac Asimov, a biochemistry professor and author widely regarded as one of the world's top science fiction writers, has called STAR TREK "...the first good television science fiction." Episodes of the series have been shown in college classrooms and STAR TREK is reported to be a solid favorite in campus, dormitories from coast to coast.

Returning for its second year as an NBC-TV color attraction, STAR TREK will take off for its weekly adventures in interstellar space from a new8:30-9:30 PM/NYT Friday launching pad. In this location, it will benefit from the lead-in strength of the Tarzan series, which paced NBC's new entries in the 1966-67 ratings sweepstakes. A viewing favorite among young adults (18-34) and teenagers, STAR TREK has averaged a 36 Q-score this past season to rank in the TV-Q Top 20 among these groups (and also in the total sample). The NT! Full Analysis Report also shows that it slants strongly toward better-educated, middle and upper income families in urban areas.

Singled out for Emmy nominations in five different categories, including "outstanding dramatic series," STAR TREK was one of the most honored new series of the past season. Other show and talent categories in which it received 1966-67 award consideration were "outstanding supporting performance by a dramatic actor" (Leonard Nimoy as Mr. Spock), Photographic Special Effects, Mechanical Special Effects, and Film and Sound Editing. This unique NBC-TV adventure series was accorded another unusual distinction when Leonard Nimoy was invited by the National Space Club to represent STAR TREK as the guest of honor on a recent extensive tour of the Goddard Space Flight Center in Washington, D.C. The tour was followed by a dinner for 1500 club members, at which Vice President Humphrey was the principal speaker.

one of TV's most loyal followings:

Second only to The Monkees among NBC programs in the volume of fan mail it attracts, STAR TREK has been the recipient of more than 28,000 letters of support and encouragement from one of the most loyal and articulate viewer followings currently attracted by any television series. This mail comes from a wide diversity of sources — space technicians, college professors, college students, businessmen, housewives, and high school and grade school students. For the most part, the letters of these STAR TREK enthusiasts are distinguished by their thoughtful and literate content and by their stress on the believability [sic] of the series and the high quality of the acting and writing.