At the end of the fifth season of Highlander, Richie Ryan is killed by Mac, who is under the influence of a demon and thinks that he's surrounded by his enemies. When the series returns, it's a year later and Richie is definitely dead, to the disappointment of fans. A number of them grouped together and formed "Clan Denial", a website for those who deny that Richie is dead. 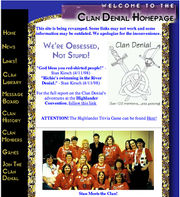 The Beginning of Clan Denial

Richie is the Better Man, Always Has Been!

This is the home page of the Clan Denial. Our group is dedicated to the proposition that the Fifth Season Finale for the Highlander TV Series, did not happen.

We make our home on the River Denial, a tributary of the River Lethe, which in Greek mythology, is the River of Forgetfulness.

Disclaimer: The Clan Denial does not claim any ownership to Richie Ryan, Duncan MacLeod, or any other Highlander characters and images presented in this web site. Davis/Panzer, Rysher, Gregory Widen et al, own them. We do, however, reserve the right to abuse Richie, Duncan, Methos, and the rest, as much as we want. As for Richie Ryan, we take much better care of him than Davis/Panzer ever could. We also reserve the right to occasionally borrow Methos and Joe to guest star at naked Spin-the-Clone parties, and for the record, Duncan MacLeod makes an excellent water boy." [3]

Becoming a Member, and The Oath

To become a Member, chose a title, and recite the Oath below. When you are done, click on the magic button to put Archangel (hawk spit) in its proper place. Notice! Dual citizenship IS allowed! You can be a part of another clan, and still be a part of ours :) All ya gotta do, is deny the existence of Archangel (hawk spit), and you're one of us :) We've had a number of people expressing the reluctance to apply because they are a part of another clan (such as a Rysher forum clan), so this is our way of clearing the air on this issue :) [4]

I, (state name and Clan title) do solemnly Deny before Davis/Panzer and these witnesses that an episode of Highlander the Series called "Archangel" (hawk spit) exists.

I do further Deny the existence of any Highlander episodes belonging to a hypothetical Sixth Season.

I do Absolutely Deny, that Richie Ryan would ever, ever walk blindly into Dumpster's swinging Katana undefended.

I do Affirm my love for Highlander the Series. All 105 episodes. (Actually, maybe 104, "Modern Prometheus" wasn't too good either...but it did have Methos in it, so what the hell, 105 it is.)

I do Promise to continue to enjoy and cherish all 105 episodes in reruns, and video tape, all the days of my life. (Especially those with Richie in them! And Methos too!)

I do Renew my affection for Duncan MacLeod, (yes, Duncan MacLeod) the character whose adventures I thrilled to for, oh, 99 episodes, until he became a victim of characterization rape, and demoted by the writers from Hero to Heel, sometime around "Comes A Horseman" (hanging around with Cassandra, killing Byron and other such nonsense).

I, however solemnly Promise to continue Denouncing Dun'Kan, whose appearances became more and more common towards the end of the series.

I do Swear that Richie Ryan is the coolest, grooviest, most Badass sidekick in television history. I avow that this fact is obvious, and Undeniable. What with that Strawberry-blond hair...those blue eyes...those Fifth Season muscles...

I do Promise to stop drooling and keep my mind out of the Gutter for the rest of the Clan Oath!

Finally, I do Promise to uphold the True Spirit of Highlander, which was desecrated by the powers that be, for reasons beyond my ability to comprehend.

Why Archangel (hawk/spit!) and Season 6 (WHAT Season 6?) Must be Vigorously Denied by all "True, True Highlander Fans"