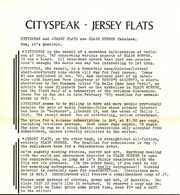 flyer for Cityspeak: The Special Edition and the proposed zine, "Jersey Flats", click to read

Cityspeak is a gen letterzine founded and edited by Sara Campbell. They contain articles, essays and poems.

For you who are interested yet in a BLADE RUNNER Fan Club, write to Sara Campbell through CITYSPEAK, a BR Fan Club newszine. They have an unofficial fanclub set up. it costs $6 to join and you get a great newsletter and an offer to speak your piece on BR (good or bad) in CITYSPEAK. The newszine costs $1.50 for a single copy.

Two issues of the zine were published (out of a projected four), the first one in late 1982. The editor had a personal statement in Universal Translator #26 saying that the newsletter was defunct.

Cityspeak: The Special Edition is a fiction off-shoot.

Cityspeak 1 was published in December 1982 and contains 19 pages. The deadline for the second issue was January 17, 1983.

"This zine is run on a co-op basis: non-subscriber submissions will not be accepted unless directly solicited by the editor."

"LETTERS: Unless you specifically request otherwise, letters will be automatically considered for publishing. If publishable,'they will be subject to editing on a length/grammar basis."