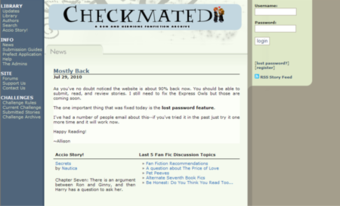 Screenshot of the site's home page from June 2011.

Checkmated is a selective Harry Potter fanfiction archive. Its subtitle is A Ron and Hermione Fanfiction Archive. The majority of fics are Ron/Hermione, but it also hosts gen fics or those containing relationships that do not contradict R/Hr. As of October 2012, it housed 2828 stories by 1261 authors. The site also hosts forums and runs challenges. Its mission statement states:

"Checkmated is a Ron and Hermione archive that welcomes other R/Hr friendly ships and Gen stories. Our goal is to host quality fiction of varied subject and style that meets a certain level of grammar and craftsmanship. Through reviews and our forums, we hope to foster discussion of the Harry Potter world and the fanfiction it inspires in a friendly, supportive environment."

As of October 2014, the archive is offline, after several years of recurring downtime. Checkmated mod kp_mushu reported that they were currently unable to get the site back online without site owner Allison.[1]

RedBlaze describes the founding of Checkmated, which, like many other HP archives of the time, was started in response to FanFiction.Net deleting adult-rated stories:

[Cleverness Has Nothing To Do With Love By shellyk] is what the very walls of Checkmated was built around. When FF.net banned NC-17 fics, the author of this story got the idea to start a new site, a place where people could post R/Hr smut for all to read (well, all over 18 that is.) The idea grew from there and she approached some of her other smutty friends, namely me, chickadilly, harpinred and writergirlie and we set out to start this site that was originally for the racier side of Ron and Hermione (heh, I told you we were smutty.) And thus, Checkmated was born. . .[2]

In a later post, RedBlaze reemphasizes the archive's original goals:

We originally started the site because we kicked off FF.net for writing smut. We made it a place where we could post all the R/Hr smut we wanted. Most sites banned smut saying it wasn't canon [...] so we created a site where people weren't screaming canon and smut wasn't mocked. The original heading for CM was: For the racier side of Ron/Hermione.[3]

The following are the most-reviewed stories as of October 2013:

Other notable stories that are no longer on the archive include: