Chasers... was a Harry Potter fanfiction archive for the Marcus Flint/Katie Bell pairing.

Chasers... was started by Jen on June 26, 2004 and was hosted at willowslilsecret.net, which was also home to the Willow's Lil' Secret archive, also run by Jen.[3] In 2006, Jen's sites moved to Moonlit Musings (moonlit-musings.net),[4] where Chasers... may have been briefly hosted before moving to Magical-Worlds (magical-worlds.us), hosted by Shannon, circa October 2006.[5] 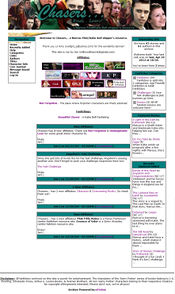 Screencap of the main page, archived May 2005.

Sometime between February and June 2009, Chasers... was closed "due to problems with this site being hacked and it's low activity."[1]

Chasers... accepted all fanfiction featuring Marcus/Katie "as the main ship" regardless of rating. Initially, the only content restrictions were that stories could not contain RPF, sex involving characters under 17, or sex with animals.[6] The archive later adopted a more generalized policy that also prohibited stories based on works whose authors disapprove of fanfiction and required disclaimers and spoiler warnings.[7]

The minimum length requirement for stories was 500 words, and for essays 200 words.[6]

Chasers... initially used the standard MPAA ratings, but switched in May 2005 to a more generic age-based rating system, likely because around this time the MPAA was emailing various fanfiction archives and instructing them to stop using their ratings. The archive's new rating system included the ratings R-7, R-10, R-13, R-16, and R-18, which simply corresponded to "Restricted to ages 7 & up" to "Restricted to ages 18 & up".[8]

The archive split stories into two categories, "Age Friendly Fanfiction" and "Adult Fanfiction". There were also categories for challenges and essays, though there were only ever three challenge submitted and no essays.[2]