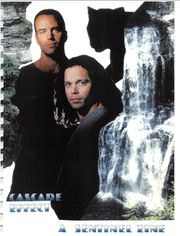 Cascade Effect is a 80-page gen digest-sized Sentinel anthology. It has interior b/w artwork by Corinna Hansen and Heather Bruton and a cover by Hindman.

This was my first 'gen' zine purchase and, if it's typical of 'gen' zines, it may well be my last. Why? Because it isn't what I would consider 'gen'.

"Mixed Emotions" by DC Black may fit the description of "suggestive GEN" due to the fact that Jim and Blair spend the entire story pretending to be lovers as part of an undercover operation to lure out a killer, but the last few pages of the story are fully dedicated to pounding into the reader's head that the suggestiveness doesn't mean anything because the guys are completely *straight*. It's gen, but I would say that it's also borderline anti-slash. The case part of the story is well-written but the story continues on too long after the climax, which makes the ending drag and hurts the story as a whole. 26 pages, including 3 illustrations.

"Five O'Clock Shadow" by [R S] is what, personally, I would call het. A story that describes Jim and a woman undressing one another and continues the scene right up to the point where she's unwrapping the condom (at which point the phone interrupts things) seems like a little more than "suggestive gen" to me. The female OC is an MS who is apparently irresistible to Jim, and also saves the day after Blair goes missing. Not only does her sister turn out to know where he is and what's going on, but Pam is also "a good shot" and saves Jim from having his throat ripped out by a vicious dog during the rescue. 48 pages, including 1 illustration.

The poem, "Unrequited" (in my full-size copy of the zine, the poem's title is just "Unrequited", not "Unrequited Love"), on the other hand, does qualify as "suggestive GEN". 1 page.

To summarize: the writing quality for the zine as a whole is good, though the female OC in "Five O'Clock Shadow" comes uncomfortably close to the Mary-Sue category, and "Mixed Emotions" would have benefited from having the "straight guys can love each other too" (aka "we're *straight*, dammit!") section trimmed drastically as, anti-slash overtones aside, it comes after the story's climax and makes the ending drag.

If you like het, you will probably enjoy the zine. The illustrations (three by Corinna Hansen for "Mixed Emotions" and one by Heather Bruton for "Five O'Clock Shadow") are excellent, the DC Black offering has a good case story at its heart, and the zine as a whole has been well proofed for typos and spelling errors.

If you are looking for true gen, like slash, don't like het, or are particularly sensitive to Mary-Sue tendencies in characters, then you'll probably want to give this one a pass. With only two stories and one poem in it, you're probably going to be very disappointed if only one of the stories really appeals to you.[1]