For other uses of the term, see Bondmate. 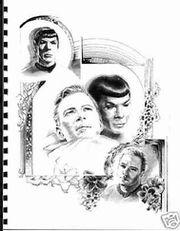 front cover, issue #1 by Shelley Butler -- An excerpt from a longer review below: "Wow! What a picture! I can totally understand why Linda chose it for the cover, as this is a prime example of Shelley working with all the skills and sense of composition she’s developed over the years." [1]

Some descriptions from the flyer and some are by Gilda F.

See reactions and reviews for No Regrets.

See reactions and reviews for A Fuzzy Memory.

See reactions and reviews for A Calming Love.

See reactions and reviews for Just Another Quiet Evening.

See reactions and reviews for Dreams of the Heart.

See reactions and reviews for No Greater Gift.

See reactions and reviews for Unsundered.

See reactions and reviews for And the Hunter Home from the Hill.

[cover art]: Wow! What a picture! I can totally understand why Linda chose it for the cover, as this is a prime example of Shelley working with all the skills and sense of composition she’s developed over the years.

I guess what I like most about this picture (and there is a lot to like!) is the composition. The central picture gives you the impression that it’s in a square, but that’s an illusion when you look at it carefully. There is actually only one ninety degree angle at the bottom left, and then there’s an interesting arch overhead that is embellished with additional lines that swoop over the heads of Kirk and Spock.... I find this utterly fascinating, how complex the actual outline of the central picture is, and that the secondary figures are, too. When you get a copy of the zine in your hand, just look at those three elements, the framing of the three pictures, and you’ll see several different treatments all blending together to provide a harmonious whole. There are Shelley’s signature flowers (I have no idea which flowers, as I am not a horticulturally inclined person), but all given a slightly different treatment, one from the other. I think they are even different flowers and leaves. Woven in with the flowers are space backgrounds, just touches of them, that provide a lovely support to the characters and the flowers, and then finally the swooping of the central arches and what I would call beveled frames. I note that the frame around Kirk is squared off and the one around Spock is circular. (This reminds me of the lines of dialogue at the end of Fetish by Jenny Starr, where Kirk tells Spock he is all angles.) But my point is that all of this is pretty darn complex and must have involved considerable thought before it was executed. And I’m not even talking about Spock’s hair or Kirk’s lips, but other things that I think we art consumers don’t even tend to think about. There is obviously a lot of work behind-the-scenes that our artists, and particularly Shelley here, engage in before putting pen or pencil to paper. By the time she got around to actually drawing Kirk and Spock, that was probably easy after all this geometric precision! (I also note that most of the flowers are clustered around the smaller Kirk picture, while there are just a few leaves around Spock. Not a random choice by the artist, that’s for sure! And beautifully executed.) Anyway, I do like the expression on Kirk’s face in the central picture; he is looking upwards, possibly to the sky, but also leaning back in Spock’s arms. A bit contemplative. And there is a younger Kirk in the lower right picture, with the ribbed knit collar uniform, looking thoughtful in a different way. Spock is smiling in the central picture (he’s got Kirk in his arms, why not?), but he looks considerably more severe in the smaller portrait to the upper left, with a touch of thought, maybe, in his eyes. Younger? Yes, I think the side pictures are younger versions of these two men, who have no clue that their initial meeting will lead to a wondrous union of souls and bodies. Younger Spock seems a bit resistant, stiff and stern, while younger Kirk is more open, softer, but still with no idea what Spock will eventually mean to him: just about everything by Star Trek III, right? And depending on your interpretations and the story you’re reading at the moment, much earlier than that, possibly.

I love this about many of Shelley’s pictures! That you can look and really see so much! There’s a lot going on here, and nothing she chooses to add is random. It all adds meaning to a greater composition and a greater meaning. Wonderfully done! Great job, Shelley! [2]

See reactions and reviews for Next to Godliness.

[zine]: (Warning, possible spoilers, but I've tried not to! )

This is a new zine, a wonderful new zine from Sarian, that has been well worth the wait. My review may contain a few spoilers, but hopefully, they'll just serve to ensure that everyone will want to read the stories. That is certainly my intention. This zine is great value for money. It has a beautiful Shelley Butler cover, with not one but three, count 'em, THREE, lovely illos of moments in our favourite Bondmates' lives! Sarian states in her editorial that both her K/S zines are a homage to the "golden age" of zines, and this one is certainly a treat to hold and read. There are some wonderful illustrations, some cute, some intense. My favourite is called Attractions, and is by Hogebon, an artist I don't think I've seen before. All the artwork has been reproduced on high quality photo paper, which is a nice touch, and the poetry pages all benefit from backgrounds and borders. Truly, the entire zine is a work of art. I don't always read zine poetry until much later, but the varied paper really makes them stand out. The Editor calls her poets talented and she's right. Some of the current best in our fandom, including S R Benjamin. I am always pleased to see this name in a list of contents and she/he doesn't disappoint here: the poems, or at least 3 of them, appear to run in sequence… and have different narrators.

But on to the stories. There are 3 in the zine, all of about 40 pages--really good, satisfying lengths and all by well loved K/S authors. Each name, seen in a list of contents, would have me buying the zine without a second thought. [See this fan's comments on the three stories in this zine on their individual pages on Fanlore] [3]