Better Idea Con (originally "Harrison Ford Mini Con") was planned to be a small side event to Worldcon.

It was planned by fans of Rogue's Gallery.

At some point after June 1985, the plans were changed. The con gained the title "Better Idea Con." The date and place was moved to February 14-16, 1987 at the Brunswick Motor Inn in Lancaster, Pennsylvania. Ultimately, plans for this fan-run convention were cancelled due lack of interest.

Despite the similar title to Better Idea Zine (which began in 1987), the con had nothing to do with that zine.

Several fans have asked me about a Harrison Ford Con. I think it is time for one! What we need is someone who would volunteer to get it started and also a group who could help. The Atlanta World Con 1986 has been suggested as the first location. Volunteers or fans with suggestions should write to: Kathy Vergano... She will organize a Round Robin discussion to see what might be done. IF the fans want one, it is up to the fans to get it rolling. Mow let's hear from some volunteers. [1]

The above "mini-con" is in the planning stages by some crazy fans, and we need your help. Tentative plans call for renting a room or two at the hotel for the purpose of gathering together Ford fans for chatting and discussion, and whatever else comes up.

Depending on response, we will try to arrange for some tables for the sale of fanzines, etc., and maybe a VCR for viewing tapes of appropriate movies. Suggestions are welcome. What would you like to see at such an event? PLEASE NOTE WELL: Mr. Ford will not make an appearance — this is a gathering of fans, for fans, by fans only!

Similar gatherings have been held at smaller cons across the country; we'd like to have a "national" gathering, if possible, but we need your help and response. Thanks. [2]

Temporary Reprieve and Info About New Date and Place

Okay, folks, you've been given a two-month reprieve! You now have until February 28, 1986, to let us know whether or not you would be interested in attending the Better Idea Con. Firm commitment is not necessary at this time, just an expression of interest. We plan to hold it Presidents' Day Weekend, 1987 (February 14, 15 and 16) at the Brunswick Motor Inn in Lancaster, PA, BUT before we make a final commitment to the hotel, we must hear from more interested parties. To date, we have approximately 15 people interested in attending a con located in the Lancaster area (including the committee!), but we need to hear from at least 75, and preferably 100 people, before the end of February, 1986, if this con is going to be economically feasible. You now have a date and place, please tell us that you would like to attend the con. WE NEED TO KNOW YOU WANT THIS CON TO HAPPEN!!! We know you're out there, you've just got to holler a little louder! Please let us hear from you before February 28, 1986. We will not Mke any plans to line up guests, etc. until we know there is sufficient interest.

Thanks for putting up with my haranguing, and drop me a line soonest, Cindy Smith. 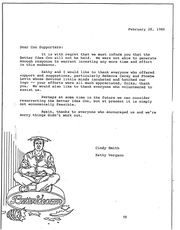 the letter to fans about the con's cancellation, printed in "Rogue's Gallery" #22 (February 1986)

It is with regret that we must inform you that the Better Idea Con will not be held. We were not able to generate enough response to warrant investing any more time and effort in this endeavor.

Perhaps at some time in the future we can consider resurrecting the Better Idea Con, but at present it is simply not economically feasible. Again, thanks to everyone who encouraged us and we're sorry things didn't work out.

The con's planners cited lack of interest which was certainly true.

Ford himself made adulation very difficult. Ford was a notoriously private person and cultivated a public persona of a "regular guy just doin' his job" and made his distaste for the trappings of celebrity well-known. He shunned fan clubs and was not supportive of organized fandom.

In "Rogue's Gallery" #18, a fan recounted her intense pilgrimage to the set of the movie Witness, and on Ford's response at being given a copy of "Rogue's Gallery": "Harrison had flipped through it... and had shaken his head, muttering, 'Where do they get all this shit.' I howled, it was priceless. So typically Harrison." [3]

"Rogue's Gallery" #19 included a letter by Ford's long-time agent, Patricia McQueeney, who directly, and tactlessly, replied to a inquiry from Joanna Emerson, editor of "Rogue's Gallery," asking if Ford could make an appearance at their con. That letter created a fair bit of controversy.

But Wait! There WAS a Ford Fan Gathering at Worldcon

Two weeks before Worldcon 1986, the editor of "Rogue's Gallery" reported that Harrison Ford would indeed attend the event in Atlanta:

One member of the former Committee for a HF meeting room at the Atlanta World Con this year just received a letter (August 17) from the World Con Committee stating that there will be a special meeting for Ford fans on Friday (Aug. 29-?-) at the Hilton Hotel in Atlanta. This announcement makes me wonder why our original HF meeting was turned down by the SF World Con committee about a year ago. The moderator of the meeting is Connie Willis, and we hope to receive a report from a Rogue member who attends this meeting. [4]

So much for his agent's statement in March 1985 when she scolded fans for asking Ford to attend their fan run gathering at the very same event.