Harrison Ford was a notoriously private person, cultivated a public persona of a "regular guy just doin' his job," and made his distaste for the trappings of celebrity well-known. This could make it difficult for fans and their adoration.

The McQueeney Letter was a March 8, 1985 letter written by Patricia McQueeney, Harrison Ford's long-time manager. It was written in reply to a query by Joann Emerson (editor of the zine Rogue's Gallery) asking if Ford would attend Harrison Ford Mini Con, a small fan gathering that was planned as an off-shoot to the 1986 Worldcon. That mini con was ultimately canceled.

McQueeney's reply to the fan request was printed in "Rogue's Gallery" #19. 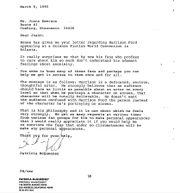 Renee has given me your letter regarding Harrison Ford appearing at a Science Fiction World Convention in Atlanta.

It really surprises me that by now his fans who profess to care about him so much don't understand his adamant feelings about anonimity [sic].

You seem to know many of these fans and perhaps you can help me get it across to them once and for all.

The message is as follows; Harrison is a dedicated, serious, thoughtful actor. He strongly believes that an audience should know as little as possible about an actor on every level so that when he portrays a character on screen, that character will be totally believable. He doesn't want the audience confused with Harrison Ford the person instead of the character he's portraying on screen.

That is his philosophy and it is one about which he feels very strongly. We get so many requests at various times from various fan groups for him to make personal appearances that I would really appreciate it if you would help me to convince the fans that under no circumstances will he make any personal appearances.

Thank you for your help.

I will admit that I was somewhat surprised to learn that you had asked if Harrison would appear at the World Con...! don't want want this to sound insulting, but I would think that you'd know he would never say yes to something like that. What I did take exception to was the tone of McQueeney's letter. I don't think the request itself was the monumental crisis that she seems to think it was. Perhaps I'm over dramatizing here, but I just can't imagine Harrison sanctioning a reply like this. I know that part of her job is fielding requests like this and putting a sort of shield up for his so he doesn't have to answer for things that she knows he wouldn't be interested in, but I do feel that a little sore tact and diplomacy would have made more of an impression that the slap on the wrist that I felt we got...Harrison refuses with class, like he does everything else in life. McQueeney made it sound as if he never wants anything to do with any of his fans ever, and I know from experience that that's not so. He just prefers his fans on a one-to-one basis rather than en masse. I saw him go out of his way to talk with fans, even initiating first contact. I don't think McQueeney was speaking for Harrison; she just sounded annoyed that she had to deal with something like this.

Guess I should make it clear that I, as editor of Rogue, received a handful of letters after RG #18 asking when or if Harrison Ford would appear at the proposed HF minicon. I wanted an "official* answer and wrote to the McQueeney agency for the edification of those who asked this reasonable question. The minicon group had nothing to do with my request. I felt this information was a necessary addition to Rogue as a HENS item. [2]

I didn't like reading Patricia McQueeney's letter about Harrison not taking personal appearances. We all are aware of Harrison's philosophy, but I feel that she is speaking too much for him. People can change their minds. Patricia is so adamant on the subject. Nothing will ever get past her to Harrison. She won't and probably doesn't let him know anything about his fans. And I think maybe Harrison should be a little more understanding and compassionate towards his fans. I mean, without us to keep seeing his movies, he couldn't be where he is today! Harrison feels that by us knowing "diddly squat" about him would take us accept his characterizations more. I don't agree. To me, if we knew about him and his personality, then we could appreciate his "acting" ability more. We would really see hit "becoming" someone else in his movies, because we know a little about Harrison himself. Without knowing him, the audience thinks he may be playing himself, not really acting. When an audience gets to know a performer (his likes and dislikes) then he/she could bring that knowledge to the role and say, 'Wow! Harrison is really giving a great acting performance. This character is nothing like Harrison." The audience can base the performance on something, rather than wonder if he is actually like the character in true life (therefore not acting).

Harrison's philosophy is weighing too much to one side, ("Just know my characters and not me") in my opinion. I respect his philosophy, I just feel that he shouldn't be so adamant about fans not knowing hit. I mean, if man does a good job, that the public sees and likes, its only natural that the public is going to want to know the 'tan' who did the good job. That's how show business is. An actor should expect this and realize that a good character and a good movie will lessen the actor's chances of being anonymous and not attracting fans. And an actor owes a great deal to fans. [3]

I know exactly what he means about those few who overstep the mark. I feel very strongly about invasion of privacy, particularly any reference to Ford's marriage. People just don't have any right to sake any comment. It's none of their business. Harrison Ford gives quite enough of his life to pleasing the fans with all his hard work to bring laughter and adventure into their lives in his working hours. And that's where a fan's interest should end. Of course we all wish Harrison well, and want to be assured that he is happy and healthy, since he has given us so much pleasure through his films, but why ruin the man's personal life by hounding his in those few hours he has to relax? That's no way to say thank you. If you like someone, you are eager to respect their wishes for Pat McQueeney had to actually point this out to some Ford fans. [4]

I am glad I wasn't the only one who thought P. McQueeney's letter was harsh. I hadn't mentioned it but felt the same way many readers did. [5]

But Wait! There WAS a Ford Fan Gathering at Worldcon

It just wasn't hosted by regular, amateur fans who originally proposed it.

Two weeks before Worldcon 1986, the editor of "Rogue's Gallery" reported that Harrison Ford would indeed attend the event in Atlanta:

One member of the former Committee for a HF meeting room at the Atlanta World Con this year just received a letter (August 17) from the World Con Committee stating that there will be a special meeting for Ford fans on Friday (Aug. 29-?-) at the Hilton Hotel in Atlanta. This announcement makes me wonder why our original HF meeting was turned down by the SF World Con committee about a year ago. The moderator of the meeting is Connie Willis, and we hope to receive a report from a Rogue member who attends this meeting. [6]

So much for McQueeney's 1985 response. She/Ford were instead holding out for a better offer, one that had better perks.