A ball pit (originally called "ball crawl" and also known as a ball pool or ball pond) is a padded box or pool filled with small colorful hollow plastic balls generally no larger than 3 inches (7.6 cm) in diameter. Instead of balls, other spherical objects can be used, such as balloons. It is typically employed as a recreation and exercise for children but larger versions for adults are available, and may be found at bars and some offices to help employees relax.[1]

In fandom, the Ball Pit meme is a Tumblr meme that originated from a July 2014 fan convention, DashCon.

During the convention, Emma Grant, an attendee, created a faux 'postcard' and posted it to her tumblr. The image quickly became the source of the Ball Pit meme. 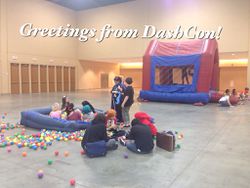 The origin of the Ball Pit meme
She wrote later:

"This was a truly enormous room set up with round tables and chairs on one side, and on the other was the jumping castle and ball pit we'd been hearing about. It was cheesy, yes, but there were people jumping and laughing in the bouncy house, and others hanging out in the ball pit. They were having fun! It was cute! So I snapped a picture with my phone. And then I thought, "Oh, I know! I'll add a cheesy postcard-like bit of text to this and post it on Tumblr."

Ten minutes later, it had 1000 notes. And then 2000, and 3000. I could continuously click "refresh" on the page and watch the notes go up by 5 every time. And then I started reading the comments on the post.

Yikes. So the thing is, I hadn't meant to make fun of the con. I just wanted to post a silly little picture. But I tagged it "Dashcon" without realizing that people all over the world were watching that tag and waiting for more wank to pop up, and so it went viral. At first, people thought it wasn't even taken at DashCon -- it looked so pathetic that they thought it was a joke. And when I looked at the picture again, I saw what they were seeing out of context, and yeah. Wow. (I showed that picture to my husband when I got home and he cracked up laughing. It really is that ridiculous.)"[2]

However, it was not until later, when the Welcome To Night Vale live reading event was canceled[3]that the Ball Pit Meme was born. As compensation to attendees who had paid extra for reserved seating to the canceled reading, the convention organizers promised, among other things, "an extra hour in the ball pit."[4][5][6] [7] The ludicrousness of offering 500+ fans more time in the overly small ball pit immediately took off and fans began flooding tumblr and twitter with photo-manips of the ball pit in various scenarios, often combining them with other Internet memes. Several ball-pit cosplays at other conventions have also photographed and posted to Tumblr.[8]

At one point, one or more individuals reportedly urinated in the ball pit.[9]

In October 2019, Tumblr user wumblr made a post starting a rumour that there had been a baby born in the ball pit at Dashcon.

did they ever track down the baby born at dashcon?[10]

A later reblog by masochist-incarnate expanded on the rumour by stating:

at dashcon, a late term pregnant lady (there for a writing panel i believe) arrived, and while going around the “event”, her water broke around 2 months earlier than expected, and began to go into labour, there was a huge traffic jam because of, you know, and driving to the hospital was out of the question, so they called an ambulance. But the thing is, because of the traffic jam, it took over 40 minutes, and she was going into labour NOW. A nurse in training there took over and had to deal with the woman, so they took the ballpit, being the best thing they could think of in the mostly empty area, cleared some of the balls away, and had to use that as a surface to deliver the baby. Around 5 minutes before they got there, they managed to deliver the baby, (thankfully) in a safe state.

A later reblog in November from the OP confirms they started it as a rumour and that no such baby existed, jokingly referencing Tumblr's monetary value, or lack thereof, as part of the reason why.[11]