This clip of Michael Burnham being tried for treason was edited to correspond with the lyrics, "I'm the bad guy".

Bad Guy is a vid for the Star Trek: Discovery pairing of Michael Burnham/Philippa Georgiou. The vid premiered at the Fan Works Con in 2019. The vidder has since posted the work to YouTube and AO3 with the simple description: 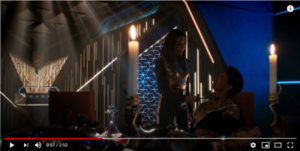 This clip of Philippa Georgiou holding a knife to Michael's throat was also edited to match the refrain of "I'm the bad guy". The vid uses similar parallels by showing each character for repeating lyrics throughout.

"This is excellent. So cheeky. I love the vibe of it, exploring Michael's darker side. It's hilarious how reluctant Michael is at indulging when it's obvious she has skills when it comes to breaking the law, or at least going against Starfleet. In contrast, Philippa is so ridiculously in her element when it comes to being the bad guy. She's basking in it. And I love that the song still fits those two approaches to morality, Michael's guilt and Philippa's pleasure. They meet precisely to confront each other, Michael oh so reluctant to pick the apple to discard it (that parallel between the apple falling and Michael knocking out Philippa was mwah*chef's kiss*). In the end, even lending a hand to Philippa turns out too dangerous and Michael fears that merely helping Philippa might strand her on the dark side: Michael sees her dark side as an acceptable sacrifice and she'll deal with the guilt, but the moment Philippa is involved... This is so very good. I am being silly but the bit at 2:14 being vaporized on the "duh" made me laugh uncontrollably. You have an eye for timing sillier beats, it's amazing. My favourite part is between 2:29 and the end: the use of the beat is so wonderfully efficient on these tense, very charged scenes. Fantastic way to tackle this off-beat part, both rhythmically and narratively. Ending on Michael waking up from this nightmare, Philippa and her colliding, thus confirming they are somehow on the same side, is masterful.

Thank you so much for creating such amazing videos and sharing them with us!"[2]

"This is such a good vid - the editing is absolutely incredible, 100% on point, and the clip choice is superb."[4]
YouTube comment by Scarlett Tranter

"I keep coming back to watch this! It's so enjoyable the way you chose clips and edit them. I especially like the shifting viewpoint of video in conjunction with the song- It's mainly Georgiou who's the bad guy, but there are the moments in the choruses where it's implied that it's Michael who's the bad guy as well. I hope more people find their way to seeing this and enjoying it as much I have :)"[4]
YouTube comment by Liam Boardman