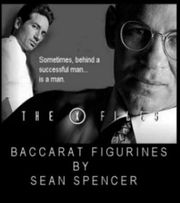 cover art by the author for the collected volume part one 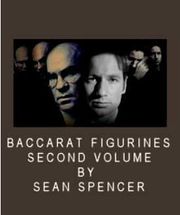 cover art by the author for the collected volume part two

From the Author's Notes

WARNING: Graphic but always loving consensual sexual activity between members of the same sex. No bad words except for S-t (once or twice)....

AUTHOR'S NOTE: There are lots of marriage series of Scully and Mulder in fanfiction. This is an attempt at something similar in a Skinner/Mulder relationship point of view.

ADDITIONAL AUTHOR'S NOTE: This story is set in season 2 except for the vampire encounter in Three which definitely never happened. We want Mulder to be disease-free when he meets up with Skinner.

Scully is also very seriously involved with another person but she does not figure in any of the graphic stuff (because I can't write about something I don't know about). Also, in this alternative reality, Mulder and Skinner never use gel on their hair. So you can banish all those gelled episodes featured so prominently in the third season.

I wanted Mulder assigned to another section of the Bureau and not to be Skinner's subordinate at work at the moment they start their relationship so that it's clear that Skinner wasn't using his more superior status to take advantage of Mulder. I want Skinner (the hunk) to be an honorable gentleman.

Nagging questions in the episodes that are hopefully answered by this story:

1. Why does Mulder borrow Dworkin's car in Sleepless?
2. Does Skinner have a lot of cars?
3. Why can Mulder afford expensive suits on a G-12(?) salary?
4. Why does Mulder find Mr. Nutt's size intriguingly alluring?
5. Why was Skinner so concerned that Dworkin make sure that Mulder went home safe and sound in Ascension?
6. Why are Skinner's shirts so white and well-pressed all the time? Does he spend hours ironing his shirts at home? Does he do his laundry?
7. Why does Mulder have so many bad hair days and is unshaven in a lot of the first and second season episodes, alternating with episodes where he had very nice short hair and has a smooth jaw?
8. Why does Mulder sometimes dress so bad when he's not in his Bureau monkey suits? Those flannel shirts with shirttails flapping in the breeze are the absolute pits! Skinner agrees with me on this.
9. Why does Skinner provide a sharpshooter so willingly when Mulder asked for one in End Game? Why does Skinner think nothing of going to Mulder's apartment in that episode and why did Mulder likewise think nothing about one's AD going to a subordinate's apartment? Does your boss drop by your apartment when he feels like it?

These questions and more will be answered on reading Baccarat Figurines! [1]

Major romance and angst between a closeted AD and a certain similarly closeted tall Bureau agent.

[This story was spotlighted at the Slashfic Hall of Shame:]

[site owner's comments]: Claim to fame: The clever and witty recommendations of the many who requested that this story appear here. I regret wholeheartedly my stupidity in not saving any of them.

Real reason it is here: It’s another ‘can’t choose just one’ problem. The first thing that caught my eye was the creative use of tense. Not content with changing tenses within paragraphs, this author frequently changes tense within sentences. But that problem, annoying as it is, is trivial compared to the characterization defilement that appears within the first twenty paragraphs. When, exactly, did Mulder's personality transplant occur?

Mulder, in a fit of pique, had taken Skinner's hand and threw it off him. He withdrew to the other side of the bed and was enraged when Skinner continued to close the gap between them.

"I told you, I don't feel like it," Mulder repeated, trying to be calm.

"Are you mad at me for working late again?" Skinner paused when he realized that he'd been through this before with his ex-wife.

Mulder, however, shook his head. He blinked at the harsh light.

"I just don't feel like it," Mulder said in a small voice. He was still turned away from the older man.

"But we haven't made love in two and a half weeks already," Skinner said, his voice rising uncharacteristically. "Come on."

"Please, I don't feel like it." By now, Mulder was at the very edge of the bed. Skinner put a hand on his shoulder and again Mulder flinched. The older man got angrier when he felt that Mulder was protectively holding his shorts in his hand.

"It hurt, it hurt last time," Mulder finally said in a rush and the rest came tumbling out. "I told you it hurt and you kept on going and everything's different." [2]

I don't recall the first slash fanfic I read -- but I do recall the argument (which I think was posted here) that motivated me to read it -- Someone pointed out that, in reading m/m slash, I would be able to read about, say, Mulder *and* Krycek naked (yummy). Or Krycek *and* Skinner (equally yummy).

Whereas when I read MSR (which I love), I get Mulder naked (yummy) and Scully naked (I'm sure she's yummy, too, but it's just not the same for me).

This, of course, resulted in even more time spent with fanfic. What a chore. <g> [3]

That was the first fan fic I ever read and it didn't scare me away for life. Too bad. I could have done so much more with my life in these last few years had it scared me more.[4]

Distraught over Dana Scully's abduction, a weepy, sex-hungry Mulder takes comfort in the arms of Walter Skinner. Many readers reacted badly to the clinically detailed description of their sex acts; just as many disliked Skinner's "absurd paternalism" and Mulder's regression to a pouty child.[5]