Assassin's Creed: Odyssey was released in October 2018 for Xbox One, PS4, and Windows. In this game, Layla Hassan returns as the modern-day protagonist, researching the Spear of Leonidas. Players are able to choose between a male protagonist, Alexios, and a female protagonist, Kassandra, to play the entirety of the ancient storyline with. They are also able to choose the protagonist's romantic relationships without limitations on gender, which was a draw for many LGBTQ fans.

Ubisoft has stated that the canonical hero of Odyssey is Kassandra, however, the game's marketing and merchandise overwhelmingly features Alexios.[1]

The plotline of Odyssey features whichever character the player picks as the older of two siblings, who was separated from their family at the age of seven and then raised by a man named Markos. As the story begins, they are a mercenary on the island of Kephallonia, and soon leave on a grand quest while Athens and Sparta wage war. Whichever character was not selected as the protagonist is their younger sibling, and later becomes known as Deimos, a warrior who is linked to the antagonist organization The Cult of Kosmos.

Ubisoft staff repeatedly emphasized the key focus of Odyssey was player choice. The plotline is non-linear, differing hugely from prior AC games which had the player live out a mostly-fixed series of historical events. This is explained in-canon as the Animus doing "extrapolated data reconstruction" from a very old and degraded DNA sample with an estimated accuracy of 76.3%. The player can freely choose to support Sparta or Athens in war-related missions, up to changing which side the nation-states within Greece will be controlled by, and can even support Sparta one mission and Athens the next.

As part of its non-linearity, Odyssey is the first AC game to offer the player different dialogue options when speaking to NPCs, including romantic dialogues which can lead to an off-screen sexual encounter. This led some fans to compare Odyssey to Bioware's Mass Effect series.[citation needed]

Ultimately, giving more players the chance to feel that the protagonist is their character and that they are making their choices is key to what we set out to deliver with Odyssey--a game where promoting player choice was central to every decision we made. [...] From player dialog, to NPC lines, to player gear, to animations--the choice to pursue male and female protagonists certainly impacted many aspects of the game.

As an example, on Odyssey we built a huge new interactive dialog system, and this actually gave us the ability to build it from the get-go with that option for male or female protagonists. So in a way it was easier than it would’ve been to try and retrofit it into an existing system.

Another example was on the writing side where any line that used a specific protagonist name or mentioned a gendered pronoun had to be written and recorded twice and had to be selected at run time to match the choice the player had made. For example "Get him!" needed to have an alternate line recorded and technically set up to allow for the NPCs to say "Get her!" when the player was playing Kassandra. This certainly put additional work on the audio and writing teams but because of our experience on Syndicate we already had the technical knowledge and basis for how to accomplish this.

Ultimately, everyone on the team was fully invested in this from the beginning and did everything they could to make it happen--which has given us the great results we have in Odyssey and allowed players to be more connected than ever to their protagonist.[2]

I think it would be a mistake to limit our players, limit our fanbase from as many people as possible. I don't know why we would go back. We should continue pushing in this direction, bring in more players, more fans to enjoy this experience and make it their own experience.[1]

Despite Phillips' assurances that player choices were of utmost importance, the second episode of the DLC "Legacy of the First Blade" ("Shadow Heritage", released January 2019) ignores any character choices with regards to the protagonist's sexual relationships, and forces them to have a child with a specific NPC, even if the player refuses the romantic dialogue option.[3] The storyline trophy/achievement given when this happens was named "Growing Up". LGBTQ and feminist gamers across the internet took offense to this plot decision.

In a Reddit thread created within a day of Shadow Heritage's release, star621 stated:

I am so pissed about the ending. I chose not to romance Natakas and they still made me have a baby with him. I sent his ass on his way and rejected the bullshit “mercenary settles down” story. This is fucked up. It’s sexist to force your first playable female character to have a child. She can’t just be a mercenary and a fighter, she has to be a mother. On top of it all, to call the trophy “Growing Up” because you decided to let some guy knock you up is even more sexist. Women who choose not to have children are often told that we need to “grow up” and have kids. Or, even better, we’ll grow up and then realize we want kids.[4]

Star621's OP in the Reddit thread was later removed by r/assassinscreed moderators, and the thread was locked, although the moderator did state "This post did not violate our rules".

In the same thread, other users commented:

[JadedDarkness]
Glad I decided to risk the DLC spoiler to read this, I'm definitely gonna skip the DLCs now. This is just really lazy and dumb on Ubisoft's part. Either stick to linear stories or give us total freedom. This weird in-between bullshit just makes all the optional dialogue and "choices" feel like a complete waste of our time.

[agmilky]
I'm gay and I always like to envision myself as the characters I play, if the game gives you the freedom to shape them.

So as Alexios I shagged the hell out of Alkibiades, but reading this I'm not sure I can bring myself to play the DLC. My Alexios doesn't want a child :/ Or to have sex with a woman.

Don't get me wrong, I have no issues with straight (playable) characters in games, I had no issue playing as the very straight Geralt in Witcher 3.

It's just that if you let my character "be gay" in the main game, don't force me to have straight sex in the DLC :c

This is maybe very personal, but as a teen I had phases where I could be gay (secretly), then I was outed and had to pretend to be straight, only to finally be openly gay after high school. I guess that's why I react so strongly to someone trying to force straight sex onto me lol

[lithiumfleur]
I’m bi, and had Kassandra sleep with men and women (Alcibiades included)

But being forced into “lol here get railroaded into a sexual counter and have a baby?” I literally recoiled.

Hell, just have the sibling you didn’t play end up having a baby. Still not great, but much better than having the player avatar have that choice taken away[4]

Some AC fans defended Ubisoft by saying that regardless of orientation, the Misthios needed to have a child in order to pass on their genetic memories for the modern-day Assassins to view in the Animus, but other fans rebutted this by stating that current AC lore didn't require this, and that staying true to the lore was not more important than being respectful of diverse players. As summarized in one Tumblr thread:

[saxypunch]
If your series has a threadbare, actively ridiculous premise that ties together all these disparate games in a dumb, barely plausible way, you don’t have to fuck up player experiences by tying them to the dumb premise! You can just discard the premise! It was never needed! People are okay with just DOING FUN SHIT IN HISTORY, who gives a damn if it WAS ALL A SECRET FUTURE NERD’S TECHNOLOGY DREAM

[dadmondmiles]
also ubi literally built a Canon Lore Loophole Around This Shit, it’s called “oh yeah nowadays we have the capability to just Get Old DNA and View That Person’s Life Regardless If They Had Any Descendants”[5]

I mean, narratively sexually violating somebody's player character by forcing them to mother a child with a man is pretty much the kind of thing that only happens because the developers are way too chickenshit to subvert cisnormativity and provide trans representation

Like, really? In your ultra-stylized game world in which there's magical bloodlines that people access via quantum time travel, you can't come up with a way for two chicks to make a kid? Or two guys? Really, motherfuckers?

Maybe not a way that makes 𝑔𝑔ers happy, but who cares

And that's without unpacking the entire conceit of being FORCED to have a baby in the first place...[6] 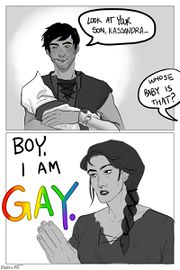 A comic created in protest of the Shadow Heritage plot. The artist also created a version featuring Alexios.

The hashtags #notmyKassandra, #notmyAlexios, #notmymisthios, #notmyOdyssey, and #PatchOdysseyEpisode2 began to be used on posts about this issue. Some writers quickly turned out fix-it fics to resolve Ubisoft's mistake.[7]

Odyssey's creative director Jonathan Dumont had stated in October 2018 that "Since the story is choice-driven, we never force players in romantic situations they might not be comfortable with."[8] After the "Shadow Heritage" upset, Dumont issued an apology, saying "we were walking a narrow line between role-play choices and story, and the clarity and motivation for this decision was poorly executed. As you continue the adventure in [the] next episode Bloodline, please know that you will not have to engage in a lasting romantic relationship if you do not desire to."[9] An unnamed Ubisoft representative told Kotaku "We share the frustration of players who find this offensive and the achievement/trophy name will be changed when DLC 1.3 patch is available."[9]

On January 25, news came that not only would the "Growing Up" trophy be renamed, but Ubisoft would also be working with GLAAD to make changes to dialogue and cutscenes of the DLC "to better reflect the nature of the relationship for players selecting a non-romantic storyline"[10] and "to improve aspects of future content releases."[11]

On February 19, the "Growing Up" trophy/achievement was renamed "Blood of Leonidas", with the description changed from "Start a family." to "Continue the bloodline."[12]