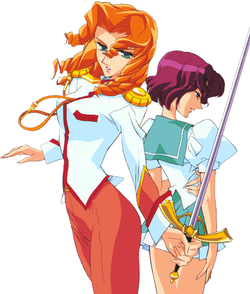 Arisugawa Juri/Takatsuki Shiori is a canonical maybe-unrequited yuri ship in the series Shoujo Kakumei Utena. The relationship is the textbook definition of "It's complicated." It forms the most fannishly popular of the three relationships within the canonical triangle involving Juri, Shiori, and Tsuchiya Ruka.

The ending of the series shows Shiori as part of the fencing team headed by Juri, hinting at a reconciliation between the two in the future.

Juri/Shiori is a very polarizing ship in the fandom. Fans of the pairing embrace it in all its unhealthy, twisted, complicated glory; some prefer it that way while others like that the ending leaves it open for a reconciliation. Its detractors come in two varieties: those who feel the relationship is too unhealthy and destructive, and devoted Juri fans who hate Shiori for causing her so much pain.