Aragorn/Legolas is a Lord of the Rings slash pairing. 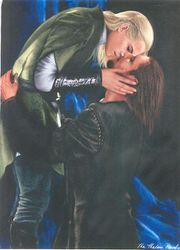 Fans of this pairing usually take their cue from the movie trilogy by Peter Jackson. Apart from the general chemistry between the two, which is palpable throughout the movies, there are a few key scenes that cemented Aragorn/Legolas as a pairing. One is the Le Abdollen scene in The Two Towers, where Aragorn (who was believed dead) returns to Helm's Deep and Legolas returns Arwen's necklace to the man. The scene, which obviously should remind viewers of Arwen's and Aragorn's relationship (while at the same time bringing Eowyn into play) was re-interpretated in a slashy way by Pseudonihilist by doing a frame by frame analysis of the scene.[1]

Aragorn/Legolas fanfiction often is dramatic or even tragic, portraying their relationship as the love that could not be. The concentration on angsty plots, evidenced by such archives as Legolas in Chains[2] or Daemel,[3] was such that the need for something a little more fluffy brought on the birth of an A/L happy!fic archive.[4]

Usually though, even if there is a happily ever after for Aragorn and Legolas, they have to overcome many obstactles standing in their way. One recurring theme in fanfiction is the conflict arising from their different species and the fact that while Legolas is immortal Aragorn will die eventually. Aragorn therefore frets about what might happen to "his elf" once he dies, fearing that Legolas might fade from grief (a concept derived from canon). To spare Legolas this fate, Aragorn tries to stay away from him and much angst ensues.

Another theme often found in fanfiction is the heir-problem. Even before Aragorn ever gets close to becoming King of Gondor, he is faced with the necessity to sire heirs in order to keep his bloodline alive. This either forces him into a (loveless) marriage or it puts a rift between Legolas and him which can or cannot be overcome (depending on the author).

Woman are mostly brought in to create conflict between Aragorn and Legolas. Arwen might be portrayed as a cold elf seeking to gain a crown through Aragorn or Aragorn is falling victim to her charms while she does not love him back. In some cases, Aragorn and Legolas only find one another after Arwen's untimely death (usually in childbirth) and in some rare cases all three characters find a balance - though threesomes involving Aragorn, Legolas and Arwen are scarce.[5]

The most widely known Aragorn/Legolas fanart is probably found on Lassegalen's Laire, which hosts a large amount of manips - mostly related to The Lord of the Rings or fandoms somehow tied to the trilogy (such as Troy or Pirates of the Caribbean).