Animal Passion is a Kirk/Spock story by Ellen O'Neil. 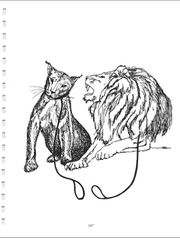 art by Sarah B. Leonard for "Animal Passion"

From the zine summary: “While investigating the disappearances of Federation citizens, Kirk and Spock are turned into a lion and panther by the woman responsible.” 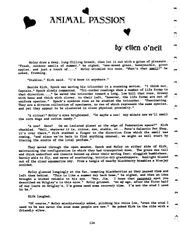 This was a fun read and a very unusual idea. I loved the scene where K and S are trying to get McCoy to tell how he recognized them in their animal uniforms. [1]

I thought “Animal Passions” was the best story in the zine. Although the animal theme has been used before, the author presented it with a new twist. And I paid the story one of my highest compliments; I wanted a sequel. Just a short one, please? I'd love to see Kirk and Spock's reaction to the truth.

I do have a few quibbles, of course, (Where would this letterzine be without quibbles?) Why is McCoy a possum? A common marsupial? In his own quiet way, McCoy is as extraordinary a person as Kirk and Spock, would have to be to have gained a position as CMO on a starship. Not every Joe is suited for such a demanding job. Of course, I realize that the rigors of the plot demanded that McCoy be allowed unfettered access to the planet's surface, and one way to ensure this was to make his 'anmial' common. But another ploy just as valid would have been the Zaharinia's recent acquisition of another animal just like McCoy. That way, he could have been special, but just not needed. I have a great deal of fondness for McCoy, and his character was finely drawn here, especially in the closing briefing room scene. Seems the author did him a slight disservice with the 'possum' business.

A few other quibbles. I was never quite clear on the physical characteristics of the Zaharinia's henchmen. Was he supposed to be a sort of camel? And why did the transporter beam release the Zaharinia's spell? At least a little hint, like maybe her unspoken desire to stay on the planet because of some special characteristic there would have been nice. Finally, the comment about Ambassador Fox struck me as confusing. Surely, Starfleet had been candidly informed of the situation, and would have been hesitant to send Fox into such obvious danger.

Despite my quibbles, this is a story which I re-read almost immediately. I'll do that every time to a well- written story that makes me smile. [2]

This was a well-written and original story that I liked very much. The author's style contained a crispness and subtle degree of humor that was highly readable. I enjoyed the joking between the Big Three in the beginning, and the details concerning the Zaharina brought her character vividly to life -- so much so that she left a lasting impression. In fact, I was disappointed that there was no interaction with her after Kirk and Spock were rescued. I could have read scenes featuring her all day. The sex act between the two animals was a bit much, and I would have preferred a more subtle way of McCoy becoming convinced of their true identities. Also, I thought McCoy's overly-simplistic questions at the end to be a weak spot. Overall, however, I was charmed by this story and will remember it for a long time to come. [3]

The "weak" Spock characterization is least evident in Animal Passion, which is a delightful comedy where Kirk and Spock and McCoy meet a woman who owns a menagerie of various animals on an otherwise deserted planet. Apparently she discerns the "inner animal" in the individuals who cross her path (some of them kidnapped for the purpose), and by magical means transforms them into those animals. Kirk, it turns out, is a lion and Spock a panther, two very rare animals for which she has been searching a long time. McCoy is a mere lowly possum, so she lets him go back to the ship. But just before/as they are transporting, she transforms captain and first officer. The rest of the story is about how McCoy figures out the improbable and gets his friends back to the Enterprise. There's a hysterical scene where the zookeeper allows McCoy to bribe him in order to see something extraordinary in the menagerie. It turns out to be the two big cats humping (well, Kirk humps Spock in his animal form), and McCoy's reaction, as well as why he's able to figure out the cats are really Kirk and Spock, is just priceless. [4]