Alternate Visions is a 198-page slash Sentinel novel by Ophelia with art by TACS. The interior art is in black and white, and the zine is full-sized. 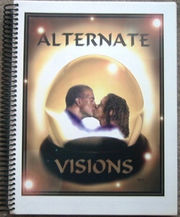 It was first published by AMC Press in 2000. In 2018, it was reissued in print and PDF by Requiem Publications.

From the heart of Cascade to the jungles of Peru and back, the story picks up where “Sentinel Too Part 1" left off, with Blair lying apparently lifeless at the fountain and Jim breathing life into him. Twists and turns as they search for Alex Barns (sic) and the VX nerve gas, while Jim and Blair try to find trust in one another as they search for the true meaning of Sentinel and Guide. But will they all find what they need in time to survive the viciousness of Alex Barns?} [1]

I seriously debated with myself if I have any right to comment on this 'zine, since I have only read to page 60 and the last page or two of the story. But I decided, well basically, what the heck. Since I peeked at the ending I can say it does end well in that it ends with J/B; and it's a first-time J/B in the beginning, but obviously I don't know what happens in between.

I think Ophelia has a great start in what could really be a wonderful story and it is rather unfortunate that this 'zine was not given the editing it deserved. As I have stated many times, editing errors are usually something I just read right through, but that ability seems to have failed me this time. I'm not sure this even had a cursory exam, which is quite a shame as I think Ophelia has some potential... even a little editing would have improved this greatly by correcting the superfluous number of times misspellings, incorrect word usage, wrong gender, and plot holes occurred.

I think this 'zine is worth buying if you are a big 'zine fan like me. I love stories that involve Alex and delve into the more mystical aspects of the Sentinel/Guide relationship. Not to mention Ophelia has some pretty hot sex going on here, too!

I don't mean to make this sound like an unreadable 'zine. I look forward to finishing it at some point. Please keep in mind this "review" was made without the benefit of having actually read the whole 'zine; there's no telling what incredible things I may have missed! Probably my loss. (The reviewer adds an update: I did finish this 'zine and the comments on editing still stand.) [2]