All for the Game

All for the Game is a series of Young Adult contemporary sports fiction novels written by Nora Sakavic featuring LGBT characters and dark themes. It's composed of three novels:

The series focuses on Neil Josten, son of a murderous crimelord who has spent the last eight years on the run. As a part of his latest fake identity, he signs with a College Exy team: the Palmetto State Foxes. Exy is a fictional sport, somewhere between lacrosse and hockey, played on a soccer sized court surrounded by plexiglass. Not only does Neil love the sport that he used to play as a child, but he's also incredibly talented. While he's determined to only stay with the Foxes for as long as his real identity remains a secret, he finds himself with more and more reasons to stay. One of which being the history he shares with the Son of Exy himself, Kevin Day, and another being the mysterious goalkeeper, Andrew Minyard.

In addition to the triology, Nora Sakavic has also published further information about the characters and their stories. This is widely referred to as the Extra Content, and is considered canon by large parts of the fandom. This has mainly been done through her Tumblr, answering messages asking her to expand on certain aspects, but also through her blog. In the Extra Content she discusses previous drafts, what happens outside of the limitation of Neil's POV, as well as post-canon event. The majority of it concerns Neil and Andrew, and primarily their relationship with each other.

The most commonly written pairings are:

Popular tropes in the fandom include: 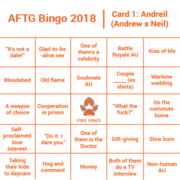 The aftg fandom is very active in terms of organizing community challenges. A lot of these are tracked by the Aftg Events Tumblr and Twitter.

Prompts for the 2020 Aftg Summer Challenge.

Lessons in Cartography [1] by crazy_like_aDate: 2016Status: Complete
Nora mentioned in her extra content that Neil slowly maps out Andrew's body and then this fic happened. Starts after The King's Men.
light fires at night [2] by intheseaDate: 2017Status: Complete
The first time Andrew realizes he wants to hear the words, Neil isn’t even doing anything. He’s just sitting there, staring at the horizon with that stupidly dramatic faraway expression of his, and letting the cigarette burn down between his fingers all the way to the filter — an outrageous waste of good nicotine, if you asked Andrew. (Or: 20+ times Andrew and Neil say I love you, and one time they say it out loud.)
The Unkindness of Ravens [3] by crazy_like_aDate: 2021Status: Incomplete
After Kevin publicly announces his intention to play for the Foxes, Riko sends Nathaniel Wesninski to convince him to return to the Nest. Unfortunately for Riko, Nathaniel has other plans.
Eyes Filled With Stars [4] by Cute Negativity CloudDate: 2018-03-17–OngoingLength: 69kStatus: IncompleteGenre: A/B/O
Andrew Minyard is a bored cadet in an Air Cavalry Academy he doesn't care for. Nathaniel Wesninski is a political hostage with nothing left to lose and a burning desire to join said Academy. No matter the obstacles - whether it's Riko's constant abuse or societal censure against omegas joining the cadets - Nathaniel will join the Foxes. He will. What does it matter if he serves the Empire that conquered his home, the same Empire that threw him into Riko's hands? Nathaniel has a plan, and he will do anything to see it through. What he hadn't factored in was to find people who cared so much, or to make promises he wanted to keep. Nathaniel was only ever good to break them, that he knew. If he was to find family on the way, well... what's the worst thing that could happen?

playing on [5] by flybbflyDate: 2018Status: Complete
In which Jean Moreau and Jeremy Knox play exy, share a dorm room, and accidentally insult each another a lot.
infinite sky [6] by idkimtiredDate: 2020–OngoingStatus: IncompleteGenre: Canon Compliant
jean's first year with the trojans as they try to teach him life

change your mind [7] by jewelsofnightDate: 2019-12-31Status: CompleteGenre: Alternate Universe
In an alternate universe, Allison and Renee's lives dovetail in an unexpected encounter on a random highway in Illinois.

Fanart for aftg can mainly be found on tumblr and twitter. Listed below are a couple of fanartists and their aftg-tags.

There have been a number of All for the Game Fanzines. Most of which have been published digitally, with any profits going to charity. 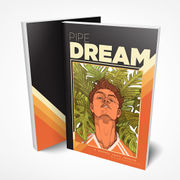