"Adoribull" is a portmanteau of Dorian and Bull, with A added to the beginning to make it sound like the word "adorable".

If neither is romanced by the Inquisitor (Male, Any Race for Dorian; Any Gender, Any Race for The Iron Bull) and "romantic banter" is achieved, the game will mark Dorian and Bull as a couple, starting from the voice line "So, Dorian. About last night..." from The Iron Bull.

A romance engaged in entirely through banter and dialogue in the main game, and with additional content in Trespasser, those wishing to make Adoribull canon must cycle through their banter together until they reach their romantic banter. This is achieved by taking both characters out together during quests outside of Haven or Skyhold. 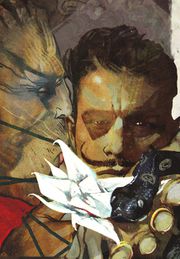 The Trigger Banter that flags their relationship as romantic is the following:

Iron Bull: So, Dorian, about last night...
Dorian: (Sighs.) Discretion isn't your thing, is it?
Iron Bull: Three times! Also, do you want your silky underthings back, or did you leave those like a token?
Iron Bull: Or... wait, did you "forget" them so you'd have an excuse to come back? You sly dog!
Dorian: If you choose to leave your door unlocked like a savage, I may or may not come.
Iron Bull: Speak for yourself. [1]

Tips on how to trigger Adoribull have been provided across multiple forums, with the most extensive being the Tumblr post by user JustJasper, Tips for Triggering Adoribull Banter. The post provides extensive anecdotal information by players. [2]

Once triggered, The Inquisitor can speak to both Dorian and Bull in Skyhold about their relationship. [3]

Cassandra: So, Bull, about Dorian...
Iron Bull: Yes, it's true.
(If Dorian is in the party)
Dorian: By all means let us discuss this together.
Cassandra: If... you're both pleased...
Dorian: I'm happy, he's happy, everyone's happy.
Iron Bull: Awww, you're happy.
Dorian: (Sighs.)
Cassandra: (Laughs)
(Otherwise)
Iron Bull: Jealous, Seeker?
Cassandra: Jealous... of Dorian?
Iron Bull: Who wouldn't be? Look at these horns.
Cassandra: I... see them.
Iron Bull: Yes, I know, right? Feel the envy

Varric: So, Bull. You and Dorian?
Iron Bull: Mm-hmm.
Varric: "Two worlds tearing them apart, Tevinter and Qunari, with only love to keep them together."
Dorian: I don't see how this is even remotely your business, Varric.
Iron Bull: Could you make it sound angrier? "Love" is a bit soft.
Dorian: Please stop helping the dwarf.
Varric: How about passion?
Iron Bull: Yes, that's better. Love is all starlight and gentle blushes. Passion leaves your fingers sore from clawing the sheets.
Dorian: You could at least have had the courtesy to use the bedposts.
Iron Bull: Hey, don't top from the bottom.
Varric: Passion it is, then.

Sera: (Laughs.)
Dorian: Something particularly funny?
Sera: You. And Bull. (Laughs.)
Dorian: I'm glad it amuses you, but what I get from my affairs is... my affair.
Sera: I know what you get.
Sera: It's like falling through a tree into custard.
Sera: "Too high! Wham! Too fast! Wham! Leaves! Wham! Splat!"
Dorian: I'm not sure which is worse, the mockery or the accuracy.
Iron Bull: (if in party) Eh, depends how much rest the trees had.
Cole: (if in party)Leaves.
Varric: (if in party) Leaves?

Apart from these, dialogue with Dorian after the final battle of the main game reveals that he is staying with the Inquisition, in part due to his relationship with The Iron Bull. [7]

Spoilers for the Trespasser DLC of Dragon Age: Inquisition are included below.

The Trespasser DLC provides a wealth of Adoribull content.

If the Adoribull romance was triggered in the main game, The Inquisitor can ask about their relationship, which has been ongoing for 3 years. When Dorian must return to Tevinter, he reveals Bull wants to come with him, though due to the political situation (Qunari and Tevinter at war), Dorian deems it impossible, neither wanting the other hurt.[8] The Inquisitor and Dorian may also discuss Bull hugging Dorian upon his return as Ambassador, "nearly crushing three of his ribs", which he secretly enjoyed.[9]

If taken out of the Winter Palace on the main mission, available player-triggered banter between Dorian and Bull includes some flirting, as well as the revelation that Bull calls Dorian "Kadan" and Dorian calls Bull "Amatus", both terms of endearment they use romantically within the game (as seen in their individual romance paths).[10]

If the Chargers were not sacrificed in Demands of the Qun, and Cole became more like a spirit in Subjected To His Will, The Iron Bull is later heard discussing Krem's budding relationship with the bard Maryden, at one point saying "I'm great at foreplay", to which the Inquisitor can respond "We should see what Dorian thinks," and Bull returns with "We should absolutely see what Dorian thinks!"[11]

If the Chargers were not sacrificed in Demands of the Qun, and Bull battles the Viddasala on the side of the Inquisitor, Dorian will ask if Bull is alright, once again referring to him as Amatus, with Bull also referring to Dorian as Kadan.[12]

However, if Bull is still loyal to the Qun, the team will be forced to kill him in battle, and Dorian will say "The Iron Bull must have been so proud of himself. Kadan... (Laughs bitterly)". If Cole is in the party, he will reveal that Bull felt no pain, presumably in reference to his own betrayal. [13]

In the epilogue, if both Dorian and Bull survive Trespasser and are romantically involved, it is revealed that they carry on their relationship by meeting at a border-town villa whenever they found time.

At one point, when Dorian is kidnapped by Venatori, Bull mounts a rescue despite the great risk of a Qunari entering the Tevinter Imperium. He and the Chargers break Dorian out, as well as free a few slaves along the way.[14]

In Dorian's epilogue, if high approval, it is revealed that he gave the Inquisitor a sending crystal with which to communicate long distance. In a tweet written in Rot13 code post-Trespasser, user lesbianadaar asks: "in games w dorianbull can we assume dorian gave bull the magical amulet to help w the long distance relationship thing?" To which writer Patrick Weekes responds "Yes :)"[15]

Some controversy around the ship arose due to what many have interpreted as sexually aggressive and even sexually harassing banter by The Iron Bull towards Dorian.

Iron Bull: Quite the stink-eye you've got going, Dorian.
Dorian: You stand there, flexing your muscles, huffing like some beast of burden with no thought save conquest.
Iron Bull: That's right. These big muscled hands could tear those robes off while you struggled, helpless in my grip.
Iron Bull: I'd pin you down, and as you gripped my horns; I. Would. Conquer. You.
Dorian: Uh. What?
Iron Bull: Oh. Is that not where we're going?
Dorian: No. It was very much not.

Others, however, have interpreted it as The Iron Bull's response building on Dorian's objectifying, somewhat xenophobic comments about Bull's identity as a Qunari, and his own sexual interest in the Bull.

Both characters start off rough and antagonistic towards each other (Enemies To Lovers), and this is one of the first signs that they will begin a relationship later in the game if given the chance to banter more often.

The Adoribull Holiday Tumblr is the most recent account creating Gift Exchanges as well as Big Bang and Reverse Bang events for the ship.

Its last event was the Adoribull Holiday Gift Exchange 2020. Works are compiled on Tumblr as well as on Archive Of Our Own.

Writer Patrick Weekes and Editor Karin Weekes have shown appreciation for the Adoribull ship on Twitter, with Karin, at one point, using Adoribull fanart provided for her birthday as her icon, and Patrick confirming Adoribull lore for fans, such as the sending crystal tweet mentioned above, and deeming certain Adoribull fanart as "accurate" and "possibly even canonical". [17][18]