A Guide to Blake's 7 Erotica 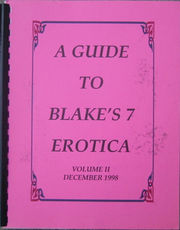 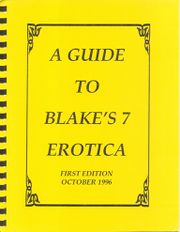 A Guide to Blake's 7 Erotica is a slash and adult het fan fiction resource. It lists available fanzines, contents of fanzines, poetry and art and organizes the information by zine and by author. It has two issues, and the second one is an updated text of the first.

The zine listings at Hermit.org are based on this zine. The zine's introduction is a fine explanation of how descriptive abbreviations are used at Judith Proctor's site.

My main fannish activity lately has been a kind of busman's holiday that some of you know about already: I'm compiling a bibliography of B7 smut. This came partly out of dissatisfaction with Bill Hupe's Blakesindex, which leaves out a lot, and partly out of a need for something simple but absorbing to do when I'm not working.

Instead of playing solitaire, these days I type out lists of zine contents and alphabetize them.

The smut zines are pretty much done, with only a few exceptions that I still haven't found or found out about.

The results have been posted on Space City, and I hope to have a hard copy version for sale at Eclecticon in November, with the contents of all the B7 smut zines I could lay hands on, and an alphabetized list of stories by author. Eventually I'll tackle the gen zines in the same way, but that will be a much bigger job.

At the end of this trib I'll attach the latest version of the grand zine list, which several of you have already seen. Please let me know if you spot anything that should be corrected or added.

In the meantime, just for fun, I took the smut listings and went through them to see how many pairings I could find of Blake and people other than Avon. I also left out A/B/V triangles and menages, since there are a lot of those, but I included other menage stories, orgies, etc. A few stories with more than one Blake pairing are repeated under the different headings. I arranged the stories by date, as far as possible, just to see what trends there were, if any. Here's what I found. But I make no guarantees as to the quality of these stories or the treatment of Blake! And I'm sure there must be more Blake stories— this was just the result of one quick skim, so I may easily have overlooked something.[1]

This index contains listings of all the Blake's 7 adult-content zines whose existence I am aware of, with the contents of most of them, and a comprehensive list of stories alphabetized by author. There are also lists of poets and artists with indications of the zines their work has appeared in; for specific titles or subjects, the reader may consult the zine listings.

I have given basic publication information (editor, publisher, location, date), when available, for each zine; but I have omitted prices and full contact addresses, since many of the zines are already out of print.

The zine listings are divided into all-B7 zines and multimedia zines. I have specified the content of each zine as "adult," "slash," or a combination, based on the following rough definitions:

Some of the milder heterosexual stories listed here could probably have been published in gen zines, and there are a few gen zines that will also accept non-explicit homosexual stories. A few zines mix gen stories and adult or slash stories. The gen stories from these mixed zines have been listed separately from the main author list.

About the indications of pairings (and other combinations): these are based, in many cases, on a quick skim of the stories, so accuracy is not absolutely guaranteed. Also, the pairings are not necessarily love matches, and not necessarily consummated. For example, Ta/V may mean anything from "Tarrant rapes Vila" to "Tarrant and Vila pick out the curtains for their honeymoon cottage" to "Vila suffers from unrequited love for Tarrant." The order of initials is generally alphabetical, just to keep things as simple as possible. Some fans prefer to indicate which character is the dominant partner, or the viewpoint character, by putting that person's initial first; but I have found that system too difficult to apply consistently.

The abbreviations used are: A - Avon; B - Blake; C - Cally; D - Dayna; G - Gan; J - Jenna; O - Orac; Se - Servalan; So - Soolin; Ta - Tarrant; Tr - Travis; V - Vila; Z - Zen; oc(s) - original character(s); ocf - original character, female; ocm - original character, male; f - filk. If the sex of an original character is not indicated, it may mean either that it could not be determined from the story or that I did not read the story myself but got the information from another source. The names of canonical minor chaxacters (e.g. Anna, Carnell) and crossover characters from other fandoms (e.g. Bodie, Spock) are spelled out.

Short lists of B7 zines (by title only, plus author for one-author zines)