A Good Coat and a Short Friend

A Good Coat and a Short Friend is a non-explicit slash 250-page Sherlock BBC anthology of fiction by Teri White. 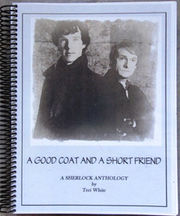 "A GOOD COAT AND A SHORT FRIEND is a slash Sherlock collection of 3 stories... I bought this fanzine on the strength of Terri White's extensive writing history mainly in Starsky and Hutch, including some of my favorite fanzines like The Pits, Podnaz, Copkiller. She has written gen and slash novels and fanzines.

She has written a new fanzine based on one of my favorite shows: Sherlock. The fanzine is a massive 250 page full size fanzine. This is a slash fanzine, but the slash is "non-explicit" which means there is not a `sex scene', but instead it explores the relationship between John and Sherlock. While slash does not overtly appear in the TV series, it is often alluded to, with various people commenting about it in every episode. The slash relationship does appear in this fanzine and is an integral part of the story, however, it is not, out of character or offensive. In fact, I thought the fanzine explored their lives and relationships at a deeper and more complex level than even what appears in the show (if that were even possible).

Characterization: Teri has captured the essence and heart of the characters, especially Sherlock. She wrote the stories from the different character's point of view, including Sherlock's, which I thought would have been really difficult. In fact it was written incredibly well. I could really see Sherlock saying and thinking these things. She has really captured the heart and essence of Sherlock. The price of the fanzine was worth it, just for this aspect.

Hurt Comfort: This fanzine abounds in hurt comfort themes from John rescuing Sherlock from a certain death to John mourning the `death' of Sherlock. The hurt comfort aspect is subtle and not overt but it adds layers and depth to the stories.

There are three stories in the fanzine: The Baker Street A-B-C, Advent, and The Empty Space Between the Stars.

The Baker Street A-B-C: This story is actually a series of interconnected vignettes organized alphabetically, but not chronologically. Each chapter is a point in time, a brief glimpse into the life of Sherlock and John. At first I thought it would be difficult to follow, but instead found it to flow smoothly and beautifully. It is sometimes written from Sherlock's point of view and sometimes John's. The story is about their relationship from its earliest beginning and throughout their lives together. Sometimes, I even found myself tearing up, it was so poignant.

ADVENT and THE EMPTY SPACES BETWEEN THE STARS are written in a more traditional format. They are excellent stories and are written in the spirit of the show.

I would highly recommend this zine to Sherlock lovers, even the gen ones."[1]