A Few Laurel Leaves is a Kirk/Spock story by Cynthia Drake. The illos are by Virginia Lee Smith.

It was published in the print zine T'hy'la #6. 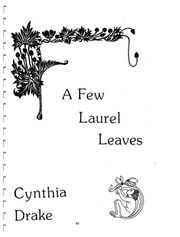 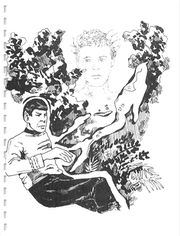 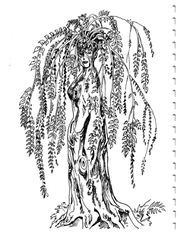 "Suppose the Enterprise crew had been unable to defeat Apollo? Kirk and Spock find some surprising resolutions to their own lives while trying to defeat the power of a god."

A nice long story and almost perfectly written. I definitely enjoyed the relationship dynamics. It was like the best of established-relationship stories, as far as issues and conflicts to be dealt with that might be absent in the first blush of falling in love, but yet definitely with the real spark of a first-time story.

The story revolves around Apollo bringing everyone on the ship down to the planet with the intent of keeping them there. The crew will do what they have to do to survive (which provided a lot of good detail as to this planet side life), but without giving in by worshiping Apollo. In a flashback we learn of Kirk's first awareness of physical desire for Spock, end how from then on Kirk has been very subtly courting him. And he is still courting him, slowly but surely. I love this idea—a nice slow courtship. Spock knows where things might lead with Kirk, and wants it Finally, holed up in a storm, Spock admits his love, and confronts Kirk regarding his earlier seduction; he feels now is the time to act on it. But Kirk's uncertainty is so strong, they end up only sleeping together—some physical affection but no sex.

Again the next day they talk about it. Kirk had been afraid of the depth of his feelings the night before So then they do have sex—quite nice sex. Kirk fucks Spock—a fantastic orgasm.

Apollo makes Kirk and Spock go on a guest and maybe he'll free them. Through woods, across a sea, up a mountain, across a desert, to a certain tree, etc. AO the classic "quest" elements come into play. Crossing the sea, Spock freaks out (I wasn't sure exactly what brought it on) and Kirk is able to initiate a meld to save him, and almost forces the bonding link. Spock wants to wait to bond until they're out of this situation; he's afraid Kirk won't really want to anymore once they're back to their "real" life on the ship.

They have really great arguments/fights. All of this between Kirk and Spock is done really well, as far as the conflicts (except that the dialogue is frequently not quite right-kind of like "just two guys"). Interesting dynamics between them—relevant and subtle—as to who is in control, etc. For instance, regarding that very first night, Spock now says, "you didn't want to make love because I initiated it. You had thought you were seducing me, but then when the tables were turned you couldn't handle it."

And here Kirk is also insisting the bond is right, whether Spock wants it or not. It has to do with Spock not trusting what Kirk is saying he wants. And Spock sees how relentlessly Kirk always will try to get what he wants, regardless of what Spock wants. Even if what Spock wants (to not bond yet) might be not-logical, still it is his want, and Kirk could be seen as not respecting this. I like these conflicts, and how they call each other on the ways eech is being manipulative.

The first time Spock fucks Kirk is really nice, but we don't get enough of how Kirk feels, just a little talk afterwards. Kirk admitting it's hard for him to let go.

And the quest is still going on. In the desert, a torturous endurance test almost to the death. At the end of this journey they have shown Apollo whatever he needed to know and he now deigns to give the people a choice as to whether to stay or not. A few stay on the planet; the rest are beamed to the ship, where Kirk and Spock soon are certain they do want to bond and so they do, and go on duty...

Revolving as it did around the "Apollo" episode, this story achieved a different tone from the start. It seemed, however, to take longer than necessary to get where we were going. I liked the concept at first, but, as with the televised version, got a little bored.

The confrontation with Apollo has not been explored much, in fact I don't recall reading about it at all. Ifs great when someone tackles one of the less obvious K/S motivators and uses itto its best advantage.

Spock is so Spock—concerned about the sheep they've been instructed to nurture—in spite of the toll it takes on his own dignity. He doesn't object to tending the animals because they will suffer without human intervention. Logical. And caring.

Kirk's nature might be more likened to the Jackass. His stubbornness is well displayed. It would be less than truthful to paint him as anything but offended by the prospect of bowing before anyone, so this seems an accurate portrayal.

I wish I could say I truly enjoyed this excursion, but it did not hold my interest as much as I would have liked. Even so, I do admire the author for injecting into one of the more obscure episodes some well-needed K/S.[2]

And A Few Laurel Leaves is possibly the best of all the Cynthia Drake stories, in my opinion. She gives an alternate ending to Who Mourns for Adonis?, and strands the Enterprise crew on Apollo‘s planet. There Apollo attempts to create a community that will live the pastoral life and worship him, while he‘s dealing with a very agitated Captain Kirk. It‘s against that background, and an epic quest, that the relationship between Jim and Spock unfolds. Very intriguing. An uncompromising and not always flattering view of Jim Kirk. One of the least sentimental K/S stories around, with a good adventure plot to boot.[3]

I‘ve admired this author‘s stories since I first started reading K/S way back when. Since she generally writes a rather weak Spock, Drake certainly doesn‘t appeal to everyone, but for those of us who thrive on these kinds of stories, she set the standard. The Spock of A Few Laurel Leaves might be her strongest rendition of our favorite Vulcan, surely stronger than the Spock of By World‘s Divided, An Inhabited Garden, or A Thin Flame.

It‘s also my favorite what if story. What if Spock had delayed firing at Apollo‘s temple because Jim Kirk was a shade too close to avoid the beam? What if the ship‘s shields had failed due to Apollo‘s lightning bolts? What if Apollo had brought down the Enterprise’s crew to live on Pollux 4 and worship him? As the story opens, Kirk and Spock are on the verge of starting a sexual relationship. Kirk had been slowly seducing Spock since a memorable shore leave spent sailing. Spock had decided he was perfectly willing to be seduced. When Apollo captures the crew, Kirk believes his plans have to be put on hold. Kirk, as one might expect, does not take kindly to being under someone else‘s control unless they‘re wearing more stripes on their sleeves than he has, least of all someone who considers himself a god to be worshipped. Spock‘s life is the sword Apollo wields over the captain‘s head. Kirk has trouble yielding control to anyone, even Spock, even where sex is concerned. This is a characterization of Kirk with which I happen to agree. I see Kirk as a natural born leader. Plop him down on any planet, in any time, and he will rise to the top like cream on milk. I see him as one who makes things happen, and this, for me, would be true in the bedroom as well as everywhere else. I don‘t think he can easily give up control. It‘s who he is. Spock, of course, wants an equal relationship in the bedroom as well as everywhere else in their private lives. This forms one of the main themes of the story. And Kirk does learn to relinquish control in their sexual lives together—very satisfyingly I might add. One of the best scenes takes place when Apollo furnishes goats and sheep for the Enterprise crew to tend and eventually to offer as sacrifices to him on altars he has conveniently provided. Kirk is vehemently opposed to anything that smacks of capitulation, while Spock is primarily concerned for the beasts‘ welfare. Once Kirk has made the commitment to Spock, he wants to go all the way; he wants the bond. Spock refuses to bond them while they are still prisoners on Pollox 4. He fears that if they do manage to regain their former lives on the ship Kirk may come to regret a decision made under these circumstances—a bond formed from the need for Spock‘s support and comfort, not true and lasting love. The thought of how an unwelcome bond would fester in his mind is a thought he cannot endure. There would be no escape and no release save death. Finally Apollo, perhaps worn down by Kirk‘s constant badgering, offer the two men an opportunity to free themselves and their crew... or die in the attempt. They are to go on a quest. The action-adventure scenes that follow are fast-paced, harrowing, and very well written. Add in some very erotic sex scenes, and you‘ve got my kind of story.

Except for one later piece that Kathy printed in a fairly recent T’hy’la (and I think that was an old never- submitted story), this author hasn‘t written K/S in years. I miss her.[4]