A Birdwatcher's Guide to Cornish Ghosts 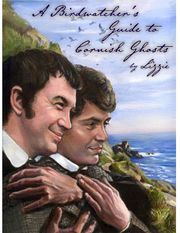 The story, sans art, was originally distributed as part of the circuit library and is also available online.

Why this must be read: Because it is the most wonderful historical AU story, and gorgeous for its take on Bodie/Doyle. The lads are absolutely the lads, even though they've been pulled back to Edwardian England and given what seem at first glance to be quite unlikely lifestyles - and yet they're not... Bodie is a gentleman living off a comfortable allowance in Cornwall, with a sideline in birdwatching and writing books about birds. Doyle is also a gentleman with a presumably comfortable income who travels the country researching and writing books about ghosts. They meet, of course, and their brilliance as partners is immediately obvious - they complement each other's talents and passions, and their canon-esque natures bring them into trouble and adventure whilst investigating strange goings-on. In the eps, they're both living a comfortable lifestyle, their brilliance as partners is obvious, they complement each other's talents and passions... and so on! *g* Oh, and just as in the eps, they're both hell on wheels - though the "infernal machines" in question are bicycles... Lizzie's love of both the lads and her native Cornwall floods through this story, so that you feel every breath of wind, see every turn of a street, and hear every word the lads speak. She is also a complete mistress of the hot and steamy, which is yet another reason to love these stories so totally. [1]

Just recently the fifth part of this novel-length fic was added to the Circuit Archive and as I had just finished the first four parts I jumped on it, of course. It's rare that I like AU fics, but this one I found - partly - very charming. I liked the first part where they get to know each other, found parts 2-4 utterly boring, and thought the fic gathered momentum again with the fifth part. The story plays around the turn of the century, not the last one, but the one before, and there's no CI5, of course. It's hard to imagine how B/D would have developed with a different background and in another time, but there's enough of the lads as we know them left to like them in this incarnation. My main objection is perhaps that there was too much gratuitous sex in parts 2-4, especially as the sex scenes are not written particularly inspiring. Instead of yet another B/D-are-going-at-it-like-rabbits I would have liked to see some of the paranormal happenings explained - but that may be more difficult to write than mediocre sex scenes. Still, I liked the world building, the secondary characters and the overall plot enough to follow future installments should there be any. [2]

Oh I love the gratuitous sex in every single part of the story, and I don't think it's gratuitous at all! To me it shows the lads' abiding passion for each other, their sense of being a part of each other, that neither can do without. Not all couples reflect their relationship/intimacy etc via their sex lives, it's true, but I have no problem believing that Bodie and Doyle might in this situation. I love that Lizzie has managed to capture the essence of the characters as I see them in the eps, despite the fact that their world is nothing at all like the CI5 world - though there's a bit of investigation and mystery... I'd love to know more about how the lads developed their particular characters in this world though - Part 5 is nice in that it gives us a glimpse of that for Doyle, I think. Personally, I think Lizzie's sex scenes are some of the hottest in Pros fic, and I actually wanted more of them in the fourth and fifth installments! *g* More ghost story would be nice too, but I can live with the slow unfolding of it because I love the relationship-y stuff between them, and just the background setting of their world, and the way they live and interact in it - I think that's very skilfully written. [3]

I *adore* this series, and confess to not finding the sex scenes gratuitous at all. What is more, I actually thought they were pretty well written. But then...maybe I have a higher tolerance for them going at it like rabbits than some. *g* Seriously, though, one of the things I really liked about this was that Bodie was (at least from a homosexual perspective) a virgin (wasn't he? ...should probably reread before I make that statement) when he met Ray. The sense of discovery was really lovely and not something you can really get with canon B&D. Those lads are a bit too knowing. [4]