2P denotes a version of a character that has an alternate personality and appearance. Often, these characters are given characteristics opposite to their canonical version, such as creepy characters becoming genuinely friendly or shy characters becoming assertive and dominant. Stories including 2P characters tend to take place in their own Alternate Universe, which is usually portrayed as darker than canon.

Thought to originate from the alternate colorings of Second Player characters in multiplayer video games, it is a term that was popularized in the Hetalia fandom. 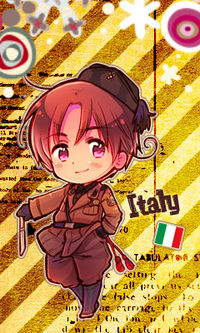 Compared to the original Italy, this version drawn by Himaruya has a brown uniform compared to the usual bright blue, red eyes, a hat and holds a knife instead of a fork.

In 2008, the creator of Hetalia, Hidekaz Himaruya, posted a drawing of Poland wearing a blue military uniform labelled 2P Chara to his blog.[1] The concept didn't take off within the fandom until 2011, when he posted redesigned versions of the three main characters to his blog labelled Another Color.[2] Himaruya later commented that he drew them as antagonists or "someone who could run an evil organization".[3] 2P versions of the Nyotalia characters were also released, giving fans more material to work with for the majority of the main cast. Fans latched on to the more prevalent inclusions of weapons in the 2P versions as well as opposite traits (like the implication that 2P Nyotalia England can cook) and began to create personalities and headcanons to match these designs.[4]

Askblogs like ask-2p-usa and headcanon blogs like hetalia-2p-headcanons helped establish fanon and encouraged more fans to get involved with the 2P characters and universe. Due to the lack of canon personalities, (or canon designs for the rest of the main cast), fans created their own designs, using attributes from Himaruya's designs. [5]

Although not very popular outside of Hetalia, fanart of Alastor from Hazbin Hotel has caused 2P to grow in popularity in that fandom as well.