...And I Am Not Leonard Nimoy 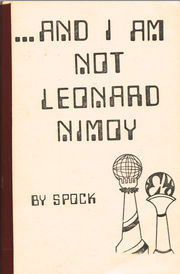 It contains 95 pages and is "written by Spock of Vulcan, with the assistance of Gail Saville of Terra."

It is dedicated "To Captain James T. Kirk, Commanding Officer and Dr. Leonard McCoy, Senior Medical Officer, U.S.S. Enterprise, who, to a lesser degree, share my dilemma! And to Sandra Zober Nimoy, my gracious and tolerant oft-times hostess who has never failed."

This fanwork is kind of a fusion between a fictional non-fictional account of a fan in 1976 interacting with Star Trek's characters, the Star Trek characters addressing and reacting to the actors who portray them (sort of RPF) as everyone tries to help Spock work through an identity crisis after a young college student had been accidentally beamed aboard the Enterprise (a common trope), a commentary on Leonard Nimoy's book I Am Not Spock, and an exploration of Spock's racial heritage.

I Am Not Spock: Charming, sensitive, delightful, insightful. And very human. Which is probably why it made me wonder what such a book would have been like if it had been written by a NON-human. Like a Vulcan, for instance. Or, at least, a HALF Vulcan. In fact, the more I thought about it, the more curious I became as to what Mr. Spock's reaction to Leonard Nimoy's book (and to Leonard Nimoy!) might be.

As sometimes happens when curiosity is sufficiently aroused, preoccupation led to action. As a veteran of bureaucracy, I did not find it unusually difficult to contact Star Fleet Command (except for the unusual time zones) and get in touch with the Starship "Enterprise's" First Officer.

I was surprised to learn that he was all too aware of the identity problem Mr. Nimoy was having and, in fact, was suffering a similar dilemma himself. [He stated to me that he found the problem somewhat disquieting which led me to believe he was about ready to climb the bulkheads.]

Since the "Enterprise's" galactic travels did not allow Mr. Spock to keep abreast of all new developments on Earth, he was unaware of Mr. Nimoy's book—although he did recall talking to him—and he had not heard any of Mr. Nimoy's interviews.

Therefore, I promptly forwarded a copy of I Am Not Spock and cassette tapes of Mr. Nimoy's interviews to the Commander for his review. Though he stated he could not understand why humans persisted in issuing such bulky materials when microtapes were certainly more efficient, he agreed to study then.

Several days later I was contacted by the Commander who expressed an interest in discussing the possibility of writing his own exposition on the problem. Working through channels, it was agreed that the "Enterprise" would take a brief R&R on Starbase Two (one of the nearest to Earth), after leaving Commander Spock in my "protective custody."

Since time travel was no longer considered particularly dangerous and no great personal risk was anticipated, Star Fleet Command agreed to this arrangement, provided the First Officer (and I) took the necessary precautions to insure that his visit would not wreck havoc with our history. (That old Prime Directive again!)

In our first meeting, I suggested to the Commander that an interview format as a basis for the book might be easiest for human readers to understand.

Learning that a common custom of Vulcans is to keep a personal log called a "Sha-lee-ha-Zeh-fe'er" (literally translated as "My The Book"), I asked Mr. Spock if he would be willing to share portions of his journal with his readers. Due to its very private nature, the Commander was, at first, understandably reluctant to allow any of it to be revealed to the general public. Fortunately, Mr. Spock is not immune to persuasion and, while he has remanded adamant about not releasing the bulk of this material, he has graciously consented to the publication of certain less intimate passages.

He has painstakingly edited the sections I have included and, not wishing to infringe on his privacy any more than I already have, I have accepted it as it. As a result, some of the entries may, at times, appear somewhat sketchy.